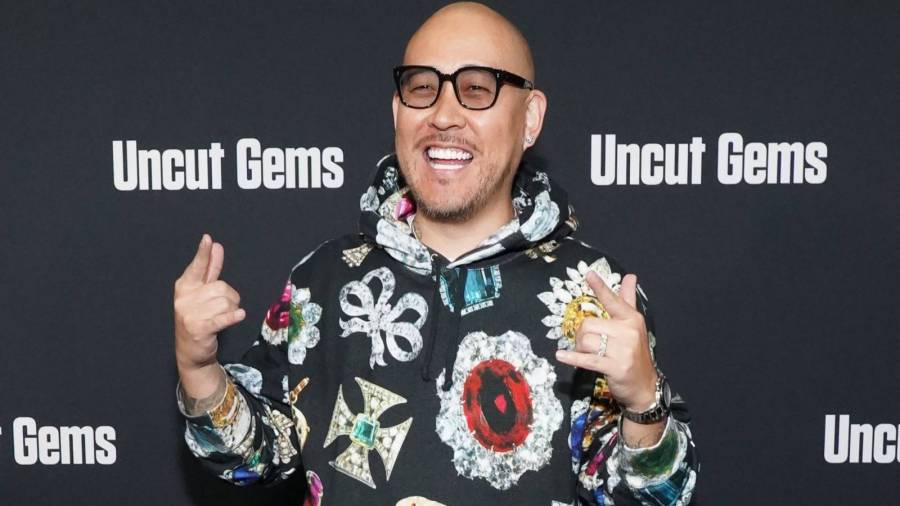 Celebrity jeweler Ben Baller is world renowned for crafting elaborate creations worn by some of Hip Hop’s elite — from Kanye West, Nas and Drake to Snoop Dogg, Tyler, The Creator and A$AP Rocky.

But the Los Angeles-based entrepreneur actually began his career in the music industry, first deejaying at Denzel Washington’s L.A. restaurant Georgia and eventually linking up with Dr. Dre who gave him a job as a producer at Priority Records and later, Aftermath Entertainment.

Baller has left his fingerprint on over 20 platinum albums throughout the course of his career, including Dre’s 1992 seminal album The Chronic and JAY-Z’s 1996 debut Reasonable Doubt. But despite working on Reasonable Doubt, there was a time when he really didn’t think Hov was something to write home about. During a recent interview with MC Serch for the Serch Says Podcast, Baller explained why exactly he slept on one of the greatest rappers of all time.

“We put out the first single [for Reasonable Doubt],” he said. “First single is Mary J. Blige, track number 2 and the B side is “Ain’t No N-gga.’ I’m like, ‘Alright I’ll fuck with this one right here because it reminds me of ‘It’s Your Thing,’ EPMD. It was all making sense. These are prime JAY-Z days … and going to Jacksonville for a fucking radio show and he’s staying at like a 2.5 star hotel and he’s complaining about it … I never really thought too much of him, but he was able to get Big’s attention. He was able to get Mary J. on an album, whatever.”

At the time, Baller admits his focus wasn’t on Reasonable Doubt, which was ultimately certified platinum by the Recording Industry Association of America (RIAA) in 2002. Instead, his attention was on the failed R&B group The Truth.

“Reasonable Doubt was like my second focus,” he continued. “Now, this was early on … we start pushing the record to radio and ‘Ain’t No N-gg’ and the B-side with the Mary J. joint ends up going gold, so I get my first official plaque for that. Now, Jay’s got a gold record.

“I have the R&B group The Truth and I’m playing the record … it was an amazing record. The crazy thing is at the end of the day, we put $1.5 million into this R&B group and it didn’t do shit. I had Missy [Elliott] write half the album — she wasn’t signed yet. That’s how dope it was. Missy was working on Aaliyah’s album at the time, One In A Million. I had Faith [Evans] vocal coaching them. She was on a song — there was so much crazy shit. So my brain wasn’t focused on Reasonable Doubt.”

One day, Duck Down Records rappers Smif-N-Wessun was at the Priority Records office and they were listening to Reasonable Doubt. He said hearing “D’Evils” basically made him stop dead in his tracks.

“I was like I should really fuck with this album a little bit more,” he added. “Reasonable Doubt goes platinum now, it’s still our record and a lot is going on in my life and me and JAY-Z walk by each other all the time. I had said some things he didn’t like so me, so we were never cool. Me and Dame [Dash] are like this [close].

“Again, I didn’t think [Jay] was going to be a big star. It was something that fell in my lap. There was songs on there that I liked and for sure, I ain’t going to lie to you. Now when I bring it back, I’ve told Jay, ‘That’s the favorite that you’ve done.’ In hindsight, I couldn’t see it in front of my face. You might have a beautiful woman in front of you and not appreciate her, you might cheat and then you realize later, ‘What the fuck was I was thinking?’”

But it was Hov who got the last laugh. As he rapped on “Hard Knock Life (Ghetto Anthem),” I gave you prophecy on my first joint, and y’all lamed out/Didn’t really appreciate it ’til the second one came out.” Reasonable Doubt has since been certified 5x-platinum, was retroactively re-rated “5 Mics” by The Source when that meant something and JAY-Z, well, we all see how his life turned out.