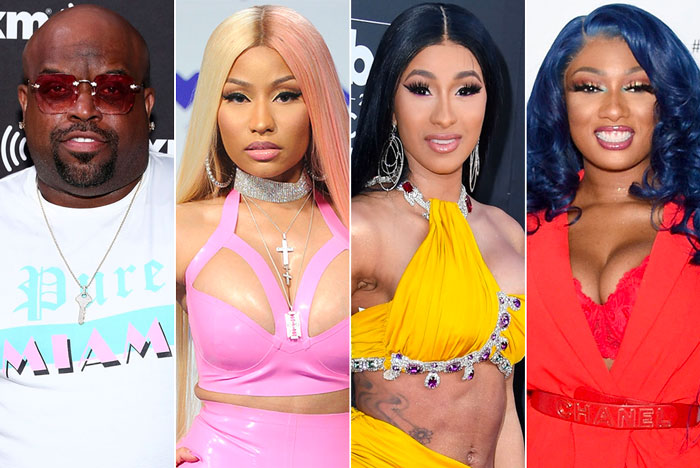 CeeLo Green is putting some of rap’s leading ladies on blast.

While reflecting on his love for old pop music in an interview with Far Out magazine, the soul crooner voiced his disapproval over the “shameless” and “desperate” content in music today and questioned the morality of female rappers including Nicki Minaj, Cardi B, and Megan Thee Stallion.

“A lot of music today is very unfortunate and disappointing on a personal and moral level,” he said. “There was once a time when we were savvy enough to code certain things. We could express to those it was meant for with the style of language we used. But now music is shameless, it is sheer savagery.”

He turned his attention to Nicki Minaj. “You have the ‘Heads of State,’ like Nicki Minaj or someone who is up there in accolade: success, visibility, a platform to influence. Nicki could be effective in so many other constructive ways, but it feels desperate,” he said.

He also criticized Cardi B and Megan Thee Stallion, who dropped the provocative video for “WAP” last week. “Attention is also a drug and competition is around. Cardi B and Megan Thee Stallion, they are all more or less doing similar salacious gesturing to kinda get into position. I get it, the independent woman and being in control, the divine femininity and sexual expression. I get it all,” he said before asking, “It comes at what cost?”

CeeLo believes that there “should be a time and a place for adult content” and that artists should hold one another accountable.

“As adults and artists, we should at least attempt to be each other’s accountability partners in some regard,” he added. “The stereotypes that are celebrated and perpetuated, ultimately make the perception a reality. It is disenfranchising and it has caused a great deal of problems.”

Neither Nicki, Cardi, nor Meg have addressed CeeLo’s criticism, but fans were quick to point out his own lyrics and transgressions including sexual assault accusations.

CeeLo: goodness gracious, women rapping about sex? is this appropriate?? could this harm society?? let’s be responsible adults.

Ceelo once had to apologize for tweeting “If someone is passed out they’re not even WITH you consciously! so WITH Implies consent” so no one should take tips from him on anything much less a woman’s sexual agency and how to use your platform. https://t.co/ObA9hoUOox