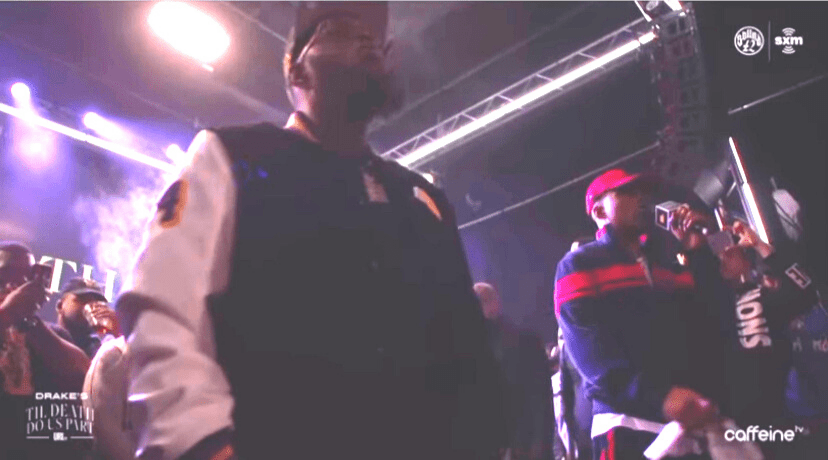 First and foremost, battle rap is on the verge of obtaining the regard it deserves when it comes to surface-level exposure. On Saturday, October 30, battle rap history was made as a stacked card featuring twelve of battle rap culture’s most voluminous contenders sparred for Drake’s “Til Death Do Us Part” event. The “Way 2 Sexy” rapper teamed up with URLTV and live streaming platform Caffeine and curated six matchups for what is likely to be considered the biggest card of the year.

The event featured appearances by notable guests including Babs Bunny and Remy Ma with battle rap media personalities Nunu Nellz and Jay Blac serving as commentators. However, the founder of the Ultimate Rap League, Smack White had something up his sleeve.

Prior to the main, Geechi Gotti vs Loaded Lux, Smack brought out Philly rap icon Cassidy and announced that he will be returning back to the ring in 2022.

Smack made it clear that this battle was not going to be an ordinary one. He hinted at Cassidy’s opponent alluding he is picking up from the Smack DVD era.

Once that was expressed, it was only clear that there only could be one possible opponent. That opponent could only be Philly hip-hop legend, Freeway. And, it was.

“He’s going up against my other brother, representing Philly, it’s my brother, Freeway!”

Stepping out to hit classic featuring Beanie Sigel and Jay-Z “What We Do,” Freeway took to the stage showing love to his notable verse.

This will be their second battle, with their first stemming from 2001, twenty years ago. The battle took place in their stomping grounds at a local Philly club called “Dances,” where they sparred in six rounds. According to what is deemed as a classic battle, by the sixth round, despite spitting hard hitters and showcasing his charismatic flow, Freeway ceased out of rhymes. Cassidy, by many, is deemed the victor of the battle as he was lyrically inclined with rhymes that were infused with his signature cunning wordplay.

“All I want to let y’all know is bars is back,” said Cassidy. “2022 we gonna get something big popping. This not just for my city Philadelphia, but it’s for the fucking culture.”

The “I’m A Hustla” rapper went on to remind the masses of his and Freeway’s pioneering influence on modern-day battle rap alluding that the “Til Death Do Us Part” event would not even have taken place if it were not for their classic battle.

Freeway took to the mic, immediately honoring his late daughter.

“First and foremost, I want to say rest in peace to my daughter. I lost my daughter this month after a long hard fight with cancer. She fought the whole time. She kept a smile on her face the whole time and I truly believe that she’s going to make it to heaven so I am content with that.”

He went on to make the masses aware that he has been in tune with the modern culture of battle rap and declared that his upcoming battle with Cassidy will serve as a necessary dose of authenticity that hip-hop will appreciate.

“Top of the year 2022. All ima say is, I’ve been studying the culture,” said Freeway. “Like Cas said, me and Cas started this shit and I am motherfucking ready!”

Surprisingly, social media battle rap fans did not seem ecstatic about the rematch with most of them expressing their exhaustion and disinterest in seeing Cassidy come back to battle rap. There is an assumption that there is no room for veterans.

However, what modern battle rap fans should consider is the cultural impact a rematch of this caliber can contribute to the notoriety of the sport. This is the same mentality that was displayed during the Big Daddy Kane and KRS-One Verzuz. The rematch between Cassidy and Freeway is a result of how far battle rap has come from the establishment of leagues such as URL, Queen of the Ring, Rarebreed, to the steaming platform Caffeine, which now serves as the hosts of battles, to the official backing of hip-hop’s most revered artist, the Champagne Papi himself, Drake. As hip-hop culture matures, for the sake of preservation, it is key to allow active legends, icons, and veterans to be showcased on the grandest scale.

The matchups featured on Drake’s “Til Death Do Us Part” card include: