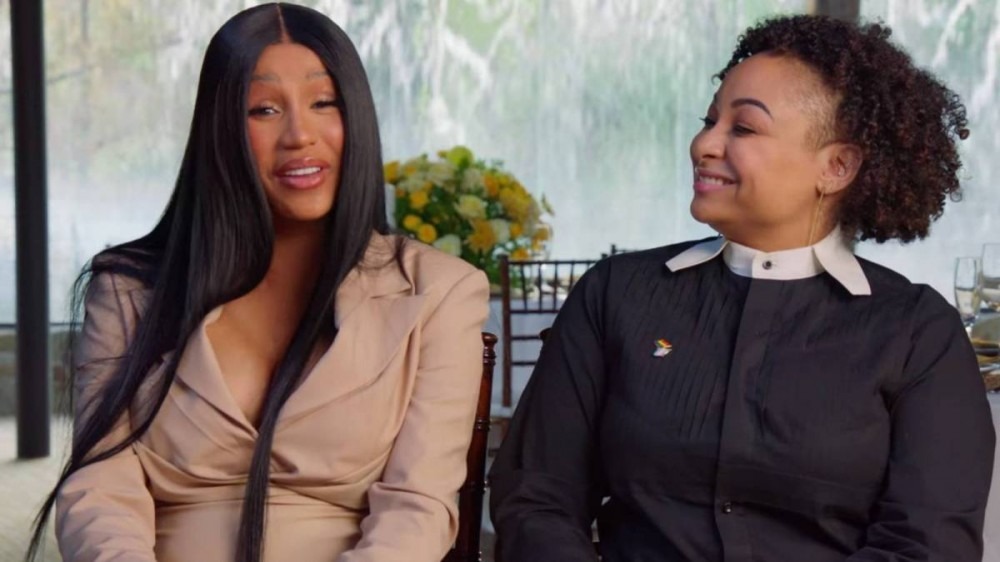 A very pregnant Cardi B tackled same-sex weddings in the latest episode of her Facebook Messenger series, Cardi Tries.

In the episode, which aired on Friday (October 8), the multi-platinum rapper joined former Cosby kid, Raven-Symoné, at the California ceremony just in time for National Coming Out Day. A clip making the rounds finds Cardi B surprising the wedding attendees and one of the brides, who immediately screams the moment she see her. (The other bride was clearly behind the gesture.)

“You are probably wondering why I’m here,” Cardi B begins. “I’m going to get these two beautiful ladies married. Not only is it a special day for you guys, but it’s a special day for me. I want to thank you guys for making me a part of your beautiful journey.”

As the ceremony comes to a close, Cardi proudly says, “By the power invested in me by the state of California and my online course, I now pronounce you wife and wife.”

Imagine being able to say Cardi freaking B officiated your wedding ?! 😩❤️🏳️‍🌈 pic.twitter.com/UVx4qHHcE6

Cardi B later opened up to Raven about her own wedding to Migos raper Offset in 2017, saying she was thinking about having a “wedding-wedding now.”

“I got married in my bedroom,” she says. “I do wish I had a bigger wedding because I’m very flamboyant, so I do want the whole dress and the whole cake and everything. I didn’t even have a ring, so I just didn’t feel like I was married because I didn’t have the whole shabangabang.”

Cardi B shared the clip to her Twitter account on Saturday (October 9) and informed her 19.2 million followers she was officially licensed to do weddings. She also confessed she was slightly nervous by Raven’s presence.

“By the way WORLD,” she wrote. “I’m licensed to marry people … soooo yea… I do it all and this was such a fulfilling thing to do and Raven was soo fun I was sooo starstruck.”

By the way WORLD I’m licensed to marry people ….sooo yea… I do it all and this was such a fulfilling thing to do and Raven was soo fun I was sooo starstruck. https://t.co/i74YNT7Xbb