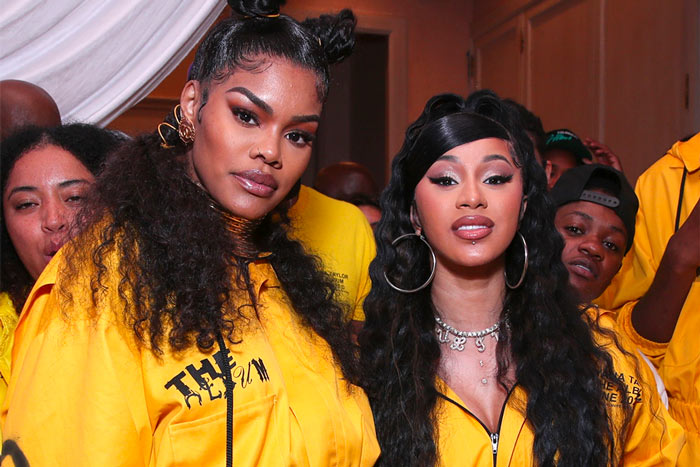 Cardi B is coming to Teyana Taylor’s defense.

On Friday, the R&B songstress announced that she was “retiring this chapter of my story,” saying she felt “underappreciated” for her artistry.

“I ain’t gone front in times of feeling super under appreciated as a artist, receiving little to no real push from the machine, constantly getting the shorter end of the stick, being overlooked, I mean the list on and on lol…” Taylor wrote. “So I’m retiring this chapter of my story with the comfort that i can depart with peace of mind seeing that all the hard work & passion put was indeed loved & supported somewhere in the world!”

She received an outpouring of support from fans, who were quick to agree that she hasn’t received the success she deserves, while others felt she sounded entitled.

Cardi B was among those on Team Teyana, tweeting her love for the multi-talented singer, who she said had the best album of 2020.

“If you know me then you know Teyana Taylor’s album it’s my favorite of 2020,” tweeted Cardi. “I swear she really got the best album this year. I hate that she feels how she feels cause she sooo talented and the music is soo good.”

If you know me then you know Teyana Taylor’s album it’s my favorite of 2020.I swear she really got the best album this year.I hate that she feels how she feels cause she sooo talented and the music is soo good.

This is not the first time Cardi has shared her support for Teyana. She was in attendance when Teyana celebrated the release of The Album back in June. The project debuted at No. 8 on the Billboard 200, but wasn’t nominated for any Grammys.

After the snub, Teyana put the Grammys on blast, noting the lack of female nominees in the Best R&B Album category. “Y’all was better off just saying best MALE R&B ALBUM,” she tweeted, “cause all I see is dick in this category..”