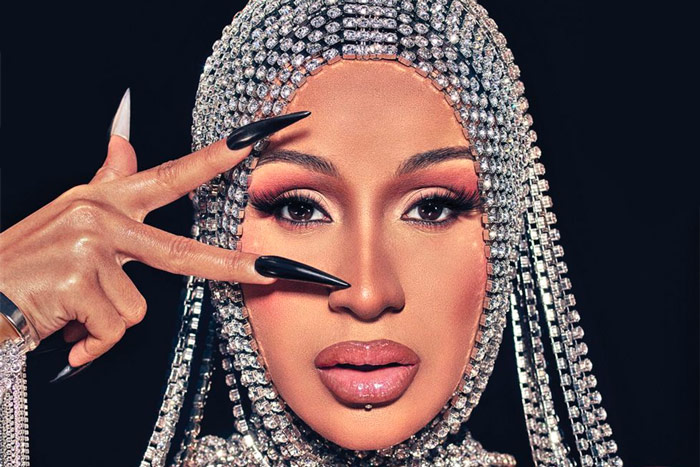 Fresh off the release of her new single “WAP” featuring Megan Thee Stallion, Cardi B graces the September 2020 cover of ELLE.

The Bronx bombshell dazzles in a crystal wig on the cover, while donning a Swarovski crystal veil and Paco Rabanne hood in other images from the stunning Steven Klein shoot.

In the interview, the 27-year-old rapper opens up about her highly-anticipated sophomore album, which she likens to Beyoncé’s Lemonade for its feminist and social justice mantras.

Other tracks will explore love and her relationship with Offset. “I don’t really like talking about love much, but I feel like I have to do it, just because I want people to know a little bit,” she said. “There’s always rumors about me and my husband, and I feel like people would rather start rumors because they want me to be heartbroken. They want me to be hurt.”

She plans to let fans in on her relationship through her music, which will include a track with her husband. “If you all are so curious to know about my relationship and blah, blah, blah, I’m going to put it in the fu**in’ music, and you can buy it, too,” added Cardi. “I’m not going to give it to you all for free.”

@iamcardib will tell you who she’s voting for, how rich she is, and bleach her body hair on camera, but there’s one topic she shies away from: “I don’t really like talking about love much,” she tells @marjon_carlos. “There’s always rumors about me and my husband, and I feel like people would rather start rumors because they want me to be heartbroken,” she says. “If you all are so curious to know about my relationship and blah, blah, blah, I’m going to put it in the f*ckin’ music, and you can buy it, too. I’m not going to give it to you all for free.” Link in bio for the full #Offset and #Cardi update. ELLE September 2020:⁣⁣⁣ Editor-in-chief: @ninagarcia⁣⁣⁣ Creative Director: Stephen Gan Cover star: @iamcardib⁣⁣⁣ Written by: @marjon_carlos⁣⁣⁣ Photographer: @stevenkleinstudio⁣⁣⁣ Stylist: @kollincarter⁣⁣⁣ Fashion Director: @alexwhiteedits Hair: @tokyostylez Makeup: @erika_lapearl_mua Nails: @nailson7th

Elsewhere in the interview, Cardi opened up about the wrongful death of Breonna Taylor, the 26-year-old Black EMT who was fatally shot eight times in her home by Louisville police. “That is so insane to me. [I saw] Breonna Taylor’s name everywhere, but I didn’t really know her story,” said Cardi. “What they did to her is really fu**ed up. Really fu**ed up.”

Five months since her death, there have been no arrests or charges. “What’s the excuse? Why is the cop not in jail? Wasn’t what he did a crime? It’s a crime! And no apology. No apology. No video of the cop coming out crying, ‘I fu**ed up. I don’t this. I don’t that.’ Nothing. It’s nothing. I don’t even know how her mom still holds her head up. Unbelievable.”

She also discussed cancel culture and how it’s impacted her. “It’s like I have a target on my back, but it’s not because of my music. Because I haven’t done music for eight months, and people still try to attack me,” she said.

But she’s not going anywhere. “I don’t give a f**k if people make up lies about me every single day. I want to make it really clear that nobody can ever make me quit.”