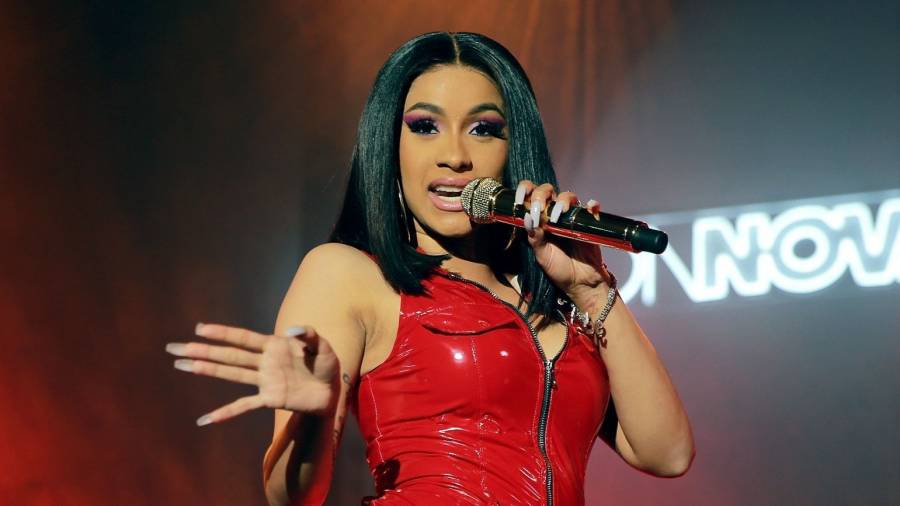 Cardi B was apparently looking to take justice into her own hands on Wednesday (January 27) when she called on her 81.2 million Instagram followers to help identify a robbery suspect, offering $10,000 to anyone who could provide information on the person. But she quickly deleted the post after T.I. and several others encouraged her to take the photo down.

“Anybody knows this man from New York?” she captioned the post. “I’m looking for him…You tried it BUDDY!!! I’m giving TEN THOUSAND for any info on this man!”

Tip wrote in the comment section, “Take this down sis.”

Looks like Dana white is wanted by Cardi b pic.twitter.com/bzTkfK2Yu9

In a pair of follow-up videos shared on Thursday (January 28), Cardi revealed why she launched the man hunt, explaining her cousin was the alleged victim.

“So I want to make this clear for the dumb people in the back,” she begins. “They’re not that bright. So OK, the reason why I posted a photo of that man is because I want information on that man because I feel like the cops is not moving fast enough. But anyways, let me tell y’all. So there’s good people in this world, like I feel like I’m a good person.

“But then there’s people who are just extremely sweet, extremely nice. So my cousin, he’s a Christian and he’s a really nice person, so this man was stuck on the highway or something, and this guy flagged my cousin.”

She continued, “He was like, ‘I need a ride ’cause I’m stuck’ and everything. So my cousin said, ‘OK, I’m gonna drop you at the gas station. When my cousin was giving him a ride, he put a gun on his head, he started putting the gun on his chest and he robbed them and he made them continue driving for like around 30 minutes, just driving him around for no reason.”

In the second video, the Grammy Award-winning rapper explained how valuable social media can be in these types of situations and insisted she wasn’t trying to have the man killed or hurt — she simply wants justice for her cousin.

“My cousin gave the pictures to the cops and everything, but I just feel like they’re taking a long time and everything. It’s like fucking social media, you can find anything and anybody and no, I’m going to get the guy beat up and killed and this this and that. If my cousin needs the information, I’m gonna give him the information so he can give to the boys. I’m a million dollar woman with a kid and responsibilities like I’m not that fucking dumb.

“I mean, Y’all was doing the same shit with the Capitol rioters, right? Y’all was fucking putting they information — all of that. So, what’s wrong? Somebody that almost killed my cousin and hit my cousin with a fucking gun. Yes, I’m gonna be upset and I’m gonna be hurt, because people take advantage of nice people, really nice people. And I hate that that shit happened to him. It’s like sometimes you can’t even be fucking nice in this world, bro. People just take advantage of nice people.”

Judging by the caption on Cardi’s second video post, it sounds like she’s received a few tips and is one step closer to identifying the suspect.

“Thanks for the info and if you have any more info please contact me,” she wrote. “I wouldn’t want this to happen to nobody else.”

And 2 ….Thanks for the info and if you have any more info please contact me .I wouldn’t want this to happen to nobody else . pic.twitter.com/e54m9zRMIV

Both Cardi and Tip have been accused of similar allegations in the past. In March 2019, the former stripper-turned-Love & Hip Hop: New York personality admitted she has a dark history of drugging and robbing men.

“N-ggas must’ve forgot, my n-gga, the shit that I did to muthafuckin’ survive,” she said. “I had to go strip. I had to go, ‘Oh yeah, you wanna fuck me? Yeah yeah yeah, let’s go back to this hotel.’ And I drugged n-ggas up and I robbed them. That’s what I used to do. Nothing was muthafuckin’ handed to me, my n-gga. Nothing!”

Meanwhile, Tiny Harris’ friend Sabrina Peterson alleged Tip once held a gun to her head while she was engaged in some kind of argument with his former female assistant. Tiny quickly defended her husband, saying, “Hold up… So you want your abuser to train your sons?” she wrote. “He was just uncle 2 years ago. Now when did you say my husband assaulted you? Did you change your mind or change it back?

“What wit you today Pooh? I’m confused. Stop Harassing My Family. Everybody know you been special (face slicing seminar lady). Please get help but LEAVE US ALONE.”