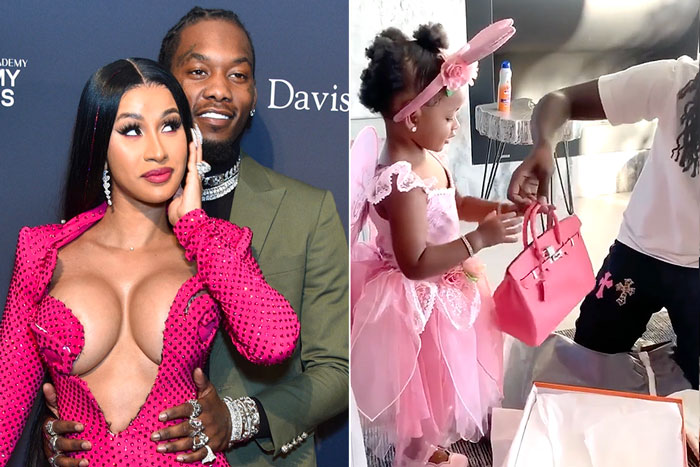 Cardi B and Offset surprised their daughter with her very own Birkin bag for her 2nd birthday.

Kulture’s father shared video of him presenting a pink Hermès Birkin bag to his baby girl. “Wow! It’s pretty,” says Offset while an excited Kulture grabs the orange box before putting the bag around her arm. “It’s yours, mama,” says her dad before she puts it down.

Fans were quick to weigh in on the lavish gift, which costs upwards of $15,000. While some were jealous of the designer purse, others criticized Kulture’s parents for giving their young daughter such an expensive gift.

“Why does a 2 year old need that? She’s probably more excited about the box,” wrote one commenter, while another added, “Kids want something thoughtful of them not adult cool points! What she gone put in there? Cheetos & pop tarts edges!”

Late is better then never I Birkin my baby

Taking to Instagram, Cardi clapped back at haters who said the bag was unnecessary for a 2-year-old. “When celebrities buy their kids jewelry and designer shit, people be like, ‘Kids don’t care about that. They only care about toys and candy,’” said the “Bodak Yellow” rapper.

“Yeah, kids only care about toys and candy, but the thing is, the kids also go outside. Kids go to restaurants, kids go to fancy places. Celebrity kids, they go do red carpets and if I’m fly and daddy’s fly, then so is the kid. If I’m wearing Shenaynay, my kid’s having the same thing. It’s not up to what the kids like. If it was the kids, they’d be outside in diapers.”

Cardi continued to defend the pricey purchase. “No, ’cause if I was looking like a bad bitch, expensive bitch and I had my kid looking like a bum bum, then y’all would be talking shit so I’m not mad that daddy bought baby a Birkin. She gon’ match mommy.”

Last week, the couple transformed their house into a LOL Dolls playground for a lavish party in honor of their daughter’s 2nd birthday.