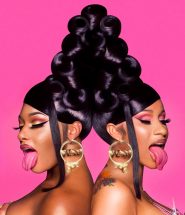 It’s about to be a Hot Girl summer.

After much anticipation, Cardi B has announced her new single “WAP” featuring Megan Thee Stallion, which is set to drop Friday. Along with the release date, she revealed the cover art, which finds the Bronx rapper and Houston hottie back-to-back with their tongues out in matching hair and hoop earrings.

Cardi did not reveal what “WAP” stands for, but fans have speculated that it’s an acronym for “Wet Ass Pussy.” The song was produced by Ayo n Keyz, who produced “Bickenhead” for Cardi’s debut.

This marks the first solo release from Cardi since “Press” in May 2019. She had delayed the single due to coronavirus and a protracted renegotiation with her label Atlantic Records.

Cardi has been in the studio working on the follow-up to 2018’s Invasion of Privacy, which won a Grammy for Best Rap Album and became the longest-charting debut album from a female rapper in Billboard history. She has also relaunched her website where fans can sign up to receive updates on new music, merch, and tour dates.

Speaking with Vogue last year, Cardi opened up about the pressure surrounding the highly-anticipated project. “So it’s scary because it’s like, now you got to top your first album, and then it’s like, damn. I wonder if people are gonna relate to the new things, to the new life, to the new shit that I gotta talk about now,” she told the magazine.