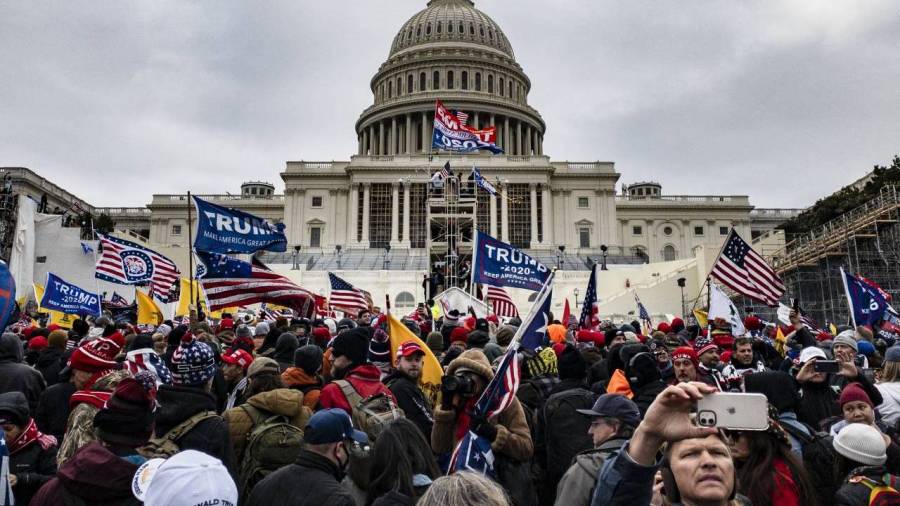 WASHINGTON D.C. – Thousands of Trump supporters showed up in Washington D.C. to protest the election results before congress certified the Electoral College to make Joe Biden the next President of the United States later this month. Rioters stormed the nation’s Capitol building on Wednesday afternoon (January 6) making for an unprecedented scene in the midst of the coronavirus pandemic worsening across the country.

The mob caused chaos by breaking down barricades and storming the Capitol to deface the government building. According to CNN, one woman was shot on the Capitol property and is currently in critical condition while multiple law enforcement officers were also injured. Government officials were all safely escorted to an unknown location.

As the internet bubbled with videos from the mayhem and the events playing out on live television, Hip Hop reacted to what was happening before their eyes on social media.

“Where the National guards,” Cardi B asked on Twitter. “The irony is pretty funny………weren’t people just wild animals in the summer for demanding justice and now? And y’all better NOT BE OUTSIDE!! These are wild thugs out here! Stay home. This ain’t our business. Stay at home safe but dangerous!”

Where the National guards ?

The irony is pretty funny………weren’t people just wild animals in the summer for demanding justice and now?🤔🤔🤔🤔……Let me just watch.

And y’all better NOT BE OUTSIDE!!These are wild thugs out here ! Stay home.This ain’t our business.Stay at home safe but dangerous!

50 Cent is never one to hold his tongue, but let the photo from his Instagram post do most of the talking for him.

Wale also chimed in emphasizing how white privilege was at work here and this was just another “field trip for [an] American terrorist.”

White privilege is no myth . We knew that already tho

This a field trip for American Terrorist . https://t.co/SxxTiWl5Tw

While the story continues to develop from the Capitol, check out more reactions from the Hip Hop world below.

nigga this is ridiculous

“We shifted the tide” – Jeezy on today’s events at the Capitol pic.twitter.com/wZRw04Vryc

On my way to Dc to sort this shit out… 🤣 #WheresJa

Me watching these wypipo tear they own shit up. pic.twitter.com/YJJyNl5pld

First of all i like to thank God 😂😂😂😂😂😂 pic.twitter.com/BzoJCYlnYM

Kid Rock and Yelawolf in the capitol having a versuz battle

If they are serious about saving the American Democracy they will arrest the President, then whoever raises up will get rolled.

This has happened to BLM organizers, Ferguson protestors and many Black activists in American history.

Words unspoken is getting said.

In most countries throughout history, if you try a coup and it doesn’t work, you get lined up and shot. Since America is no longer operating like a first world country when do the executions start?

But protesting is a crime huh ? What a shitty ass country we are. They rolled out the red carpet for the trumpsters. Man let that been us … bodies would’ve been hauled off.