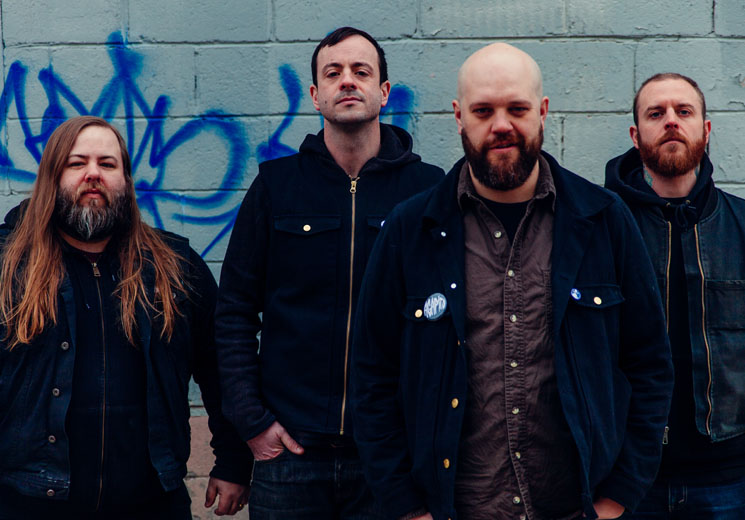 “As a fan, when I see a pre-order, I’m just thinking, ‘Don’t tell me I can buy something in three months, tell me I can buy it right now.’ Don’t bother telling me until it’s ready,” Cancer Bats vocalist Liam Cormier tells Exclaim! about why the Toronto metalcore band decided to surprise release their sixth album, The Spark That Moves. “This is the vibe that I want, because that’s how I want to buy music.”

The Spark That Moves is also the first album Cancer Bats have released on their own Bat Skull Records, but they’re still working with New Damage Records for distribution. After several mishaps with vinyl production for their last album, Searching For Zero, as well as drummer Mike Peters and bassist Jaye Schwarzer’s other project Julie & the Wrong Guys, the vocalist says the band felt more comfortable taking on the release themselves. “We’ll just be a little more on the ball on this round, because it’s our dime. We’re the ones making all this happen, so we have to make sure it’s done so we can do it the way that we want it.”

The band took a more experimental approach to their sound on Searching For Zero, incorporating darker, sludgy elements into the mix. After playing the album live for a few years and moving past the darkness that inspired it, Cancer Bats have returned to the party punk vibes they developed themselves on. “I feel like there’s a bunch those songs that have that sort vibe where, as much as we can be a gnarly band, we’re also a really fun party band,” says Cormier. “This felt so fun, this felt like getting back to why you start a band in the first place, just coming up with fun riffs.”

Cormier shows a vast improvement in his vocal capabilities and confidence in his singing on The Spark That Moves, pushing himself further than ever. After performing as Black Sabbath cover band Bat Sabbath over the past few years, and testing out new styles on the last album, the vocalist says he gained the confidence to sing in different ways without feeling inauthentic. “I’m not trying to emulate anything, I’m just trying to nail this and hit some these parts,” says Cormier. “I don’t feel like I’m cringing while I’m trying to sing these other kind melodic styles.”

The singer attributes a lot his development in his vocals to the pressure performing Black Sabbath covers in front crowds. Given that the band’s vocals are so iconic, Cormier attempted to perform the songs as close to their style as he could, and learned how much range he really had in the process. “It’s sort like painting. You paint a bunch the masters, and by default learn some other tricks. It’s the same sort idea. If we had more time in life, imagine if we did a year touring Led Zeppelin. What would that do to our band?”

While recording the album in Winnipeg, producer John Paul Peters helped the band get in touch with Mobina Galore vocalist Jenna Priestner to appear on “Rattlesnake.” Cormier says the song was inspired by the early stages Cancer Bats’ career, when they were still scrappy underdogs, much like the way he sees Mobina Galore right now. “I was like, ‘You guys have definitely heard and even had to tell people to fuck f in the same breath that I know people have had to do for us back in the day,'” says Cormier.

Although the guest spot started with just a few lines from Priestner, it quickly evolved into a much larger contribution to the song. Throughout the track, Priestner and Cormier bounce back and forth, and eventually meet up for a vicious dual vocal ending. “To me, it kind reminded me the same sort thing that happened when I got Ben Kowalewicz, Billy Talent vocalist] to record on Hail. We hadn’t planned anything and it just became like, ‘You’re singing on the whole song now.'”

The Spark That Moves also features legendary Propagandhi vocalist Chris Hannah on the track “Winterpeg.” The Winnipeg punk rock vets have worked with Peters on multiple albums, so it was a no-brainer for Cancer Bats to ask the producer if he could connect them with Hannah. “I was just thinking this is the coolest moment my entire life. Fourteen-year-old skate punk me is freaking out and current adult me is like, dude, Propagandhi still rips so hard, this is the best.”

After spending a considerable amount time visiting the city, Cormier explains he and the rest the band wanted to write an ode to Manitoba’s capital. “I just felt like that song is so metal and it was such a ripping kind traditional metal-styled song that I thought the most metal place I know is Winnipeg. It’s this sort harsh, rad city where everyone is like just kind going out and making it happen and going against the odds,” says Cormier.