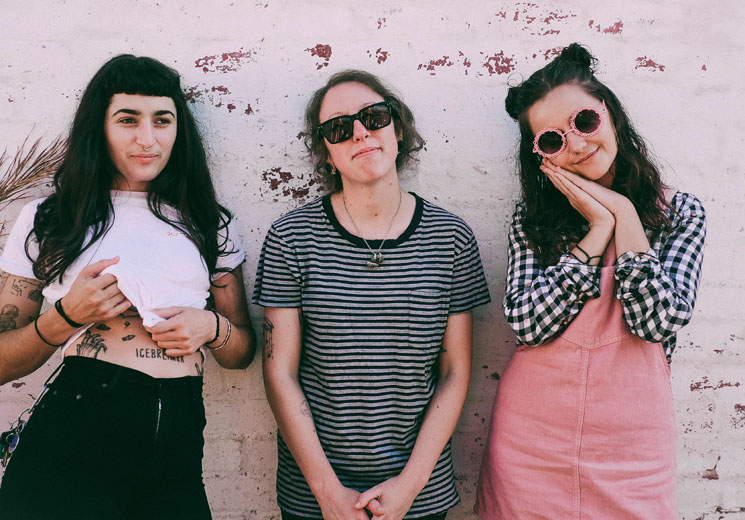 From its first track — appropriately titled “The Opener” — How to Socialise and Make Friends, the second album from Camp Cope, lets it be known that the Melbourne, Australia-based trio are pulling no punches.

“The sexism that has always existed, it needs to change,” McDonald tells Exclaim! “I feel it so much. We’re in the thick it.”

Camp Cope were born out a love for the new wave American DIY bands like Cayetana and Hop Along, as well as riot grrrl legends Bikini Kill. McDonald, a Melbourne native, had been playing solo shows in the city’s DIY scene for a couple years when she met bassist Kelly-Dawn Hellmrich and drummer Sarah Thompson in 2015. They released a self-titled debut through local indie label Poison City the following year, which inexplicably landed in the Australian Top 40 and netted the group numerous awards and accolades.

Work on the new record began just as the trio were finishing touring duties for their debut. Returning from their first North American tour last July, by August they were hashing out McDonald’s acoustic compositions as a full band. “It was a very short amount time that we had to write the songs,” she says. “It was kind scary. We had our last practice a couple days before we started recording. We went into the studio] with the attitude that ‘We’ll figure it out when we get in there. It will be fine.'”

Remarkably, all nine songs were finished in just two-and-a-half days. “All the instrumentation was done in one day. The next day was singing and mixing, but I had to take a break. I had a bleed on my vocal cord like a week earlier, so singing was really hard.”

The abbreted process capture the band’s raw energy and lyrical urgency. McDonald writes out personal experience, but cautions against literal readings her lyrics. “When we released the song ‘How to Socialise and Make Friends,’ I read a couple articles where someone wrote, ‘This song’s about how she had an affair with a married man.’ First all, it’s no one’s business if I did. But I found that so weird. Do you think you know my life at all? Do you think this is a diary? It is, but it’s not.”

Melbourne’s DIY scene fered both live music and community, says McDonald. “It felt very authentic and based on friendship and trust rather than everyone trying to make it.” Still, for all the talk inclusiveness, intentionally or not, it’s still deeply patriarchal.

Early on, McDonald was blind to this. “I didn’t really take notice that all the bands playing on the bill were men, I didn’t see that and I didn’t see why it was a problem,” she admits. “Literally all the women that I saw at shows were either in the opening band or in the audience. Then I couldn’t’ stop seeing it, and then I couldn’t stop criticizing it and wanting to change everything.”

Even before penning “The Opener,” Camp Cope were quick to share their opinions or shine a light on social injustice. And across the band’s short lifespan, McDonald has already seen change both at home and abroad.

Still, she says, the boy’s club is trying to hold on to what’s it’s got. “Sometimes the music industry will grind you down. From the radio stations playing more men than women, giving preference to] male musicians over female musicians and then being like, ‘Well we don’t want to be tokenistic.’ If there’s an opportunity for a marginalized person’s voice to be heard over a cis white male, no matter how good he is, I’d rather hear the marginalized voice.

“At this point, you can’t not be political, you can’t remain indifferent to what’s going on. Especially when people have been screaming about it for so long.”

How to Socialise and Make Friends is out now on Run For Cover.