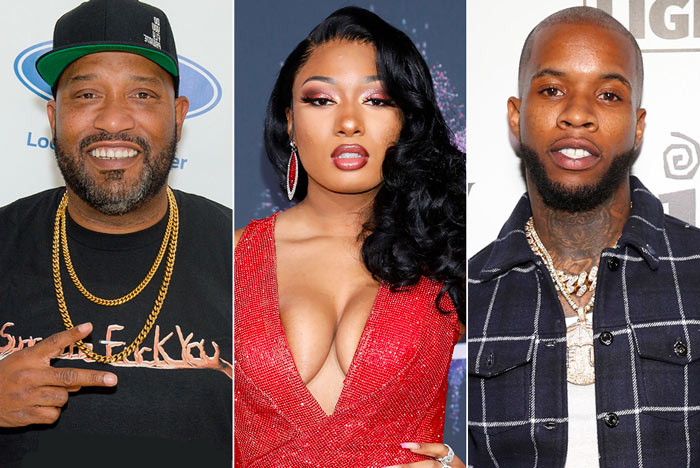 The Houston rapper is speaking out after Megan The Stallion revealed that Tory Lanez was the one who allegedly shot her last month. During a recent Instagram Live, Bun B didn’t hold back while lashing out at Tory for targeting a Black woman.

“F**k Tory Lanez! I don’t care if this goes viral or none of this shit,” he said. “I’m from Houston and if somebody would have done something to Megan in this city, we would’ve rode.”

He went on to defend Megan, who lost both her parents and grandmother. “All the people that loved her and cared about her unconditionally, that looked out for her and would have protected her, ain’t there. As an OG in Houston, I’m standing up. Tory Lanez did some ho ass shit, period.”

He said he knows Tory and his manager, but doesn’t condone his behavior. He even encouraged him to seek rehab. “F**k all that. If the man on drugs, get him some goddamn rehab. If the man got mental health issues, get him some therapy. But you not gon’ sit here and shoot this girl. And we not say nothing. This is not real ni**a shit. It’s not.”

He even called for Tory’s deportation from the U.S. back to his native Canada. “He ain’t from New York, he from Canada so at the very least they gon’ deport his ass. He got to go back to Canada.”

Bun B also took issue with the way the mainstream media has covered the story, saying there would have been more coverage if the victim was a famous white woman. “But nobody’s talking about it because it’s a Black woman. If Benji the twin from Good Charlotte had put his hands on Cameron Diaz or somebody… Put your hands on Alyssa Milano and see what happens, put your hands on Lady Gaga and see how quick they lock your ass up.”

Megan didn’t tell the cops that Tory shot her when it first happened because she was trying to protect him, something Bun B says many Black women have done.

“Black women be knowing Black men be in the wrong and they still stand up for Black men. Why? Because they know what white people do to Black men. This is why Black women are so hesitant to speak against Black men. Because Black women know how the legal system would treat Black men.”

He continued, “She didn’t want him to lose his career because it’s so hard for Black men to get that kind of employment, to make that kind of money in America.”

Bun B is not the only one to speak out in Megan’s defense. T.I. also slammed Tory for his alleged involvement in the shooting and urged him to come forward.