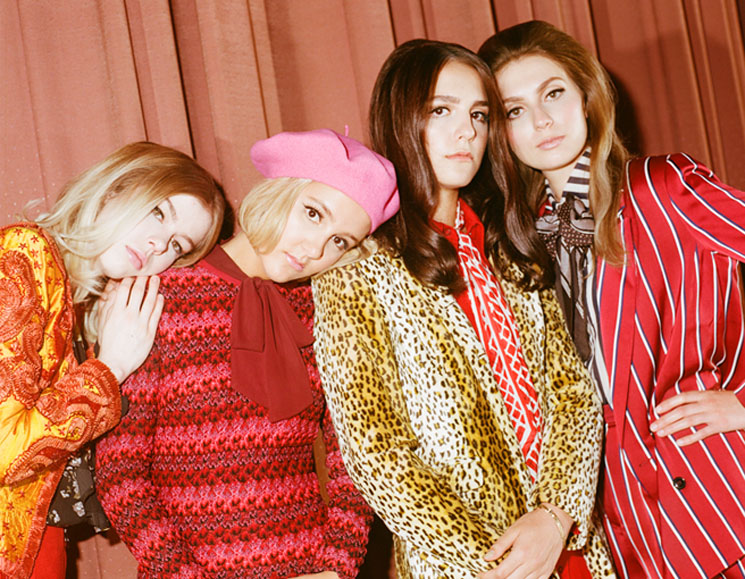 The Juno Awards celebrated Canadian music in Vancouver last month, honouring artists from a variety genres in what was truly a celebration the country's finest musical talents. Industry icons and newcomers looking to carry the Canadian music torch forward both came away with awards.

The award for Breakthrough Group the Year went to rising Toronto rock foursome the Beaches, whose debut full-length, Late Show, was released last October by Universal Music Canada. While their "Breakthrough" Juno might indicate newness, bassist/vocalist Jordan Miller, guitarist Kylie Miller and drummer Eliza Enman-McDaniel got their start a decade earlier as founding members Family Channel-adjacent outfit Done With Dolls. The group changed their name and sound, and added high school friend Leandra Earl on keyboards/guitar in 2013, to form their current incarnation.

Now that the hardware has been handed out to the four-piece, here are four factors that primed the Beaches to become the Breakthrough Group the Year at the 2018 Juno Awards.

As Jordan put it in a conversation with NOW last year, "these days, being a young a woman is very rock'n'roll." Being an all-female group in a male-dominated genre — and industry at large — certainly fits that bill as well. Recalling experiences at past gigs from the Junos red carpet this year, Kylie told the CBC, "people assumed we were fans, but we were headlining. That doesn't happen anymore, which is cool."

While the group have named St. Vincent and Garbage singer Shirley Manson among a wealth influences, members were inspired at a young age by the early work a fellow Canadian. "I remember when Avril Lavigne first came out and I wanted] to do that and have a bunch girls in a band," Jordan told Noisey last year, with Earl adding that she "got into music because all the different things Lavigne] could do on stage."

According to Nielsen's year-end report on the music industry, 2017 marked the first time that hip-hop surpassed rock as the most popular genre amongst American listeners. While many bands have been quick to integrate popular sounds and instruments from outside the rock world into their material, the Beaches were unwavering when it came to their vision making Late Show a record that revolves around six strings.

"Our last EP was more synth-driven, which was really cool, but we wanted to really release a guitar-rock record, because we feel like there's an absence it right now," Kylie explained to Sharp last year. "Rock music is such a powerful thing, and it really affected all us when we were really young. It was something that was really important to us. We want to be that band for other people."

After the band released a pair EPs (2013's self-titled effort and 2014's Heights), Island Records inked the four-piece to a development deal, leading them to Los Angeles to explore a variety songwriting partnerships. The experience left them wanting to work with those more interested in what the group had to bring to the table, rather than those looking to shape them in their own image.

"We got to work with some pretty crazy-famous and successful songwriters," Kylie recalled to The Toronto Star last year. "But a lot the time we felt we were kind in a weird place, where we were writing music that we weren't 100 percent confident in. It was a lot pop stuff."

"You get to try on a bunch different hats, but in the end you're not really being yourself," Jordan added. "So you come back with a bunch material that, while it's very aesthetically great, and it might be a really great pop song, it doesn't necessarily fit with who you are. You're always, like, 'Would I be able to play this onstage and would this feel right to me?'"

4. Meeting (and working) with heroes

Though an old adage says one should never meet their heroes, the Beaches' encounter with Metric's Emily Haines and James Shaw led to the pair CanRock vets picking up co-producer duties on Late Show. As Haines told The Globe and Mail her experience, "Rock'n'roll is definitely in the hands 19-year-old girls."

"The most important advice that Emily gave to us was, when you kinda figure out what you want to say and who you want to be, do that and don't let anybody else tell you differently," Kylie told The Toronto Star last year.

Jordan added, "She told us to follow our intuition and if we ever felt uncomfortable or pressured by people who might have had more experience or who might tell you 'this is how you can make more money or be more successful,' if anything feels wrong to you, you shouldn't do it."