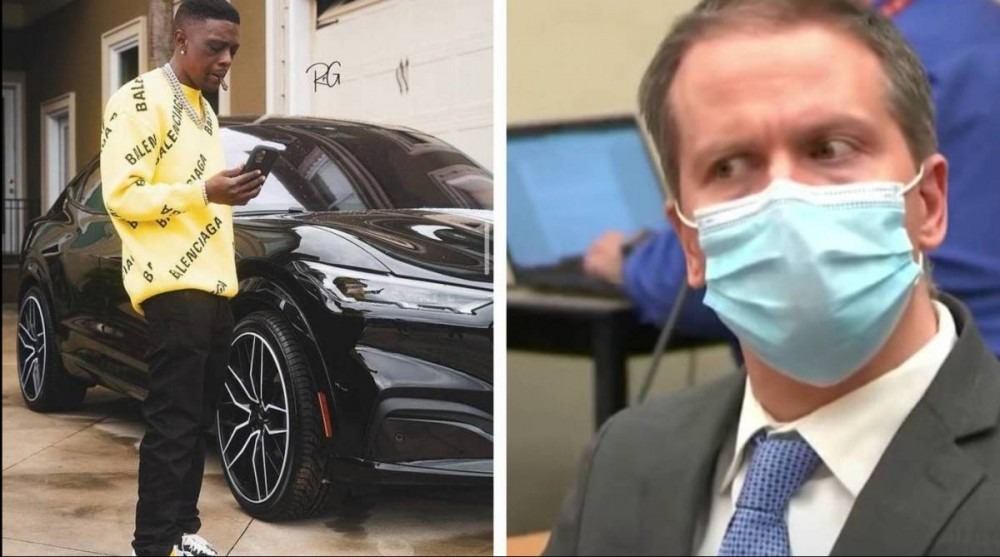 Boosie Badazz isn’t the type of rapper to hold his tongue.

From sharing his thoughts on Dwyane Wade’s transgender child to fantasizing about one-on-one time with Rihanna, the Baton Rouge native refuses to be canceled.

On Tuesday (April 20), as the world processed the news of George Floyd-killing officer Derek Chauvin receiving guilty verdicts, Boosie Badazz felt like the pending sentence should include the type of treatment that makes it hard to sit down.

He lucky he ain’t going to jail n LOUISIANA 🍆 🍆 #bosscallwouldabeenmade

After serving five years in the Louisiana prison system for drug possession and famously beating a permanent Death Row stay, there’s no question as to who Boosie Badazz knows capable of such acts.

However, the Eighth Amendment to the United States Constitution prevents “cruel or unusual punishment” so … Boosie Badazz may be out of luck.

President Joe Biden addressed the nation on Tuesday, specifying “No one should be above the law” in reaction to the Derek Chauvin verdict.

He echoed similar thoughts on Twitter writing, “Today’s verdict sends that message, but it is not enough. We can’t stop here.

“In order to deliver real change and reform, we can and we must do more to reduce the likelihood that tragedies like this ever occur.”

The manslaughter charge can impose a maximum sentence of 10 years. Judge Peter A. Cahill will decide if the prison time will run concurrently in the ensuing weeks.

Reactions to Boosie’s type of verdict went much differently, though. Check some of them below.

Boosie: If we was in Louisiana, he would’ve got some good dick tonight! pic.twitter.com/vLDjnInDRe

the nigga boosie had waiting in jail for derek chauvin pic.twitter.com/MM6q2VSRiU

Boosie prolly reading the TL like “I THOUGHT EVERYBODY WANTED EVIL SHIT TO HAPPEN TO THIS NIGGA” pic.twitter.com/Ti8ll9SzQB

Boosie is so obsessed with dick I wish he’d just ride one, bust a nut, and get it over with. https://t.co/N9Laoe8tSE

we know u was takin pipe in jail boosie. we get it. we been got it https://t.co/iYMZK5FsQh

Is it something you gotta tell us BOOSIE?!? pic.twitter.com/t1zzZ2Fn7Q

Boosie said he can make one call for the booty bandits.

Im crying boosie said he got butt thugs on standby

they said boosie was gone set him up a dick appointment 😭😭😭😭 https://t.co/cJa3WFoVNO

Boosie don’t miss a chance to speak on dick. pic.twitter.com/NAfmHSKdxQ