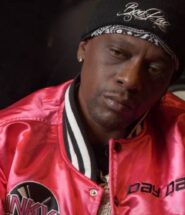 Boosie Badazz has a tendency to go viral for offering his often off-color commentary on a variety of topics. Once again, the BadAzz Music Syndicate boss is trending Twitter topic after he decided to share his thoughts on Lori Harvey’s dating history in an interview with VladTV.

During the conversation, Boosie addressed the perceived double standards when it comes to dating multiple people, saying, “I think we need to stop giving the women the power with situations like this. We gotta start giving the bachelors, the men, who are running through a beautiful woman like this the credit, who not housing her, running through her.”

The backlash was swift and Harvey fans were quick to accuse Boosie of shaming Michael B. Jordan’s current flame who Boosie called a “simp.” On Wednesday (February 17), Boosie doubled down on his comments in an Instagram post with the caption, “FUCK YALL I SAID WHAT I SAID.” He then suggested Harvey has been “passed around.”

“I wake up to all these Lori Harvey fans on my ass … talkin’ bout’ I’m hating on Lori,” he says in the clip. “Why would I wanna hate on Lori for? I just say y’all got it fucked up saying ‘Let’s go!’ If you sayin’ ‘let’s go’ that means you want your daughter to fuck seven or eight, nine n-ggas in a couple months … in the industry.”


The father of eight continued, “If that’s cool with you, for your daughter doing that … then I can’t say shit. But what’s wrong with y’all muthafuckas is … y’all salute the woman who get passed around, but y’all dog the woman who stick by they n-gga when they n-gga fuck over. Y’all dog the real bitches who stick by they n-gga, but y’all salute the bitches who go from hand to hand. The world fucked up.”

Harvey, 24, has been romantically linked to several high profile celebrities, including Future, Trey Songz and Diddy. But at the end of the day, Harvey’s fans say that’s really nobody’s business — especially not Boosie’s. Nevertheless, the 38-year-old rapper inserted himself in her business anyway.

“The last time I went to Diddy’s house, him and Bu [Thiam] was together,” he told VladTV. “They dogs … I know Lori a beautiful woman, but we gotta stop giving the glory to the women. What about the Futures? The Trey Songz? Who are really bending through these hoes? We gotta start giving them the credit instead of Lori.”