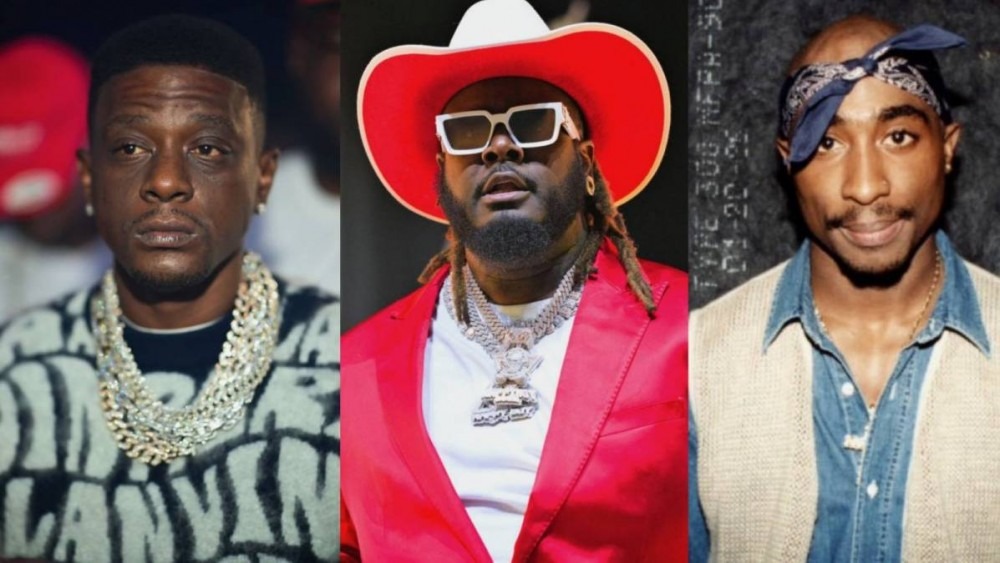 Boosie Badazz has never been someone afraid to share their opinion, and Wednesday (July 13) was no different with the rapper making it clear he’s not a fan of T-Pain’s recent comments about 2Pac.

During a tell-all interview with Akademiks earlier this week, T-Pain got into a heated debate with the podcast host over whether 2Pac would be able to keep up lyrically with some of today’s talent had he survived being gunned down in a drive-by shooting in 1996.

T-Pain then said: “Lyricism wise, ‘Pac would’ve got ridiculously murdered. Bro, ‘Pac was a crazy lyricist in our time because ain’t nobody else have no platform … If the platforms would’ve been what they are now, ‘Pac would’ve been ate the fuck up […] I’m just saying what we look at as ‘Pac’s greatest lyrics right is peanuts to what we hear today.”

The controversial comments caused Boosie Badazz to react on social media, writing that he thinks the lyricism of these past few years wouldn’t even be in the same league as ‘Pac’s.

“Why PAC still hittin n yo favorite lyricist Not?” Boosie wrote on Twitter. “I don’t like when y’all shit on 2Pac. If he was living YALL wouldn’t step r talk about PAC n then death row n-ggas!”

He continued his rant by mentioning T-Pain directly.

“2Pac was a great lyricist,” he wrote. “U probably wouldn’t understand him if u never been through the struggles that this world brings! @TPAIN I disagree the lyrics n songs these days last a couple years n there gone because they don’t have meaning. The lyrics don’t touch your heart.”

Why PAC music still hittin n yo favorite lyricist Not ?

I dont like when y’all shit on 2Pac.If he was living YALL wouldn’t step r talk about PAC n then death row niggas‼️

2Pac was a great lyricist ‼️U probably wouldn’t understand him if u never been through the struggles that this world brings‼️@TPAIN I disagree ✅the lyrics n songs these days last a couple years n there gone because they don’t have meaning .The lyrics don’t touch your heart

Elsewhere in his conversation with Ak, the “I’m Sprung” hitmaker gave 2Pac his flowers but said he considered him more of a poet than a rapper and continued to push that if social media was a thing back then, he would’ve been maligned.

He continued: “If ‘Pac was alive right now, they would’ve discredited everything he said just because he was old. That’s it. He would’ve been saying the same thing as the young n-ggas, but it would’ve been less credit ’cause he’s old.”

Meanwhile, Boosie Badazz recently revealed that Nipsey Hussle “protected” him whenever he was visiting Los Angeles.

During his latest interview with VladTV, Boosie said, “Nip was my boy. When I came down here, Nip gave me his black trucks and gave me a driver. Nip kind of protected me out here! He went out his way to make sure I was safe when I was out here.”

Boosie added he and Nipsey shared an “entrepreneur” mind and their conversations often extended beyond just music.