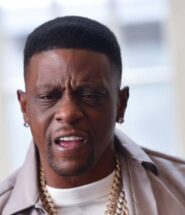 Boosie Badazz continues to lobby for Bill Cosby to get out of prison. A little over a month after Boosie teased a petition for Cosby’s release, the outspoken rapper went back to defending the incarcerated comedian on Tuesday (October 20).

The disgraced entertainer was on Boosie’s mind after a new mugshot of Cosby surfaced online. The photo became available via digital records from the Pennsylvania Department of Corrections.

Cosby was convicted on three counts of sexual assault in 2018. He was sentenced to three to 10 years in prison.

The Cosby Show star has been accused of rape and sexual misconduct by multiple women, but many of the allegations date back decades and didn’t result in criminal charges due to the statute of limitations.

His conviction stemmed from a 2004 incident in which he drugged and sexually assaulted a former Temple University employee.