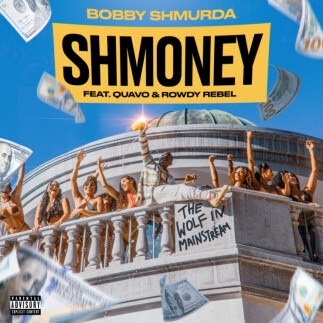 Today, New York rap star Bobby Shmurda is back with the triumphant new single “Shmoney.” The track is a cash-chasing anthem powered by stirring synths and booming bass, as well as a pair of glorious guest appearances from Migos’ Quavo and frequent Shmurda collaborator Rowdy Rebel. Listen HERE.

“Shmoney” finds Shmurda showing off two of his most preeminent talents: a preternatural gift for hooks and an undeniable ability to let loose intricate, yet powerful bars. He sounds confident, but the swagger is earned. Over the Tay Keith beat, Shmurda is all about flexing his newfound freedom and the ice that comes with his global success. “I got 150 wrapped around my wrist,” he raps. “And I just wrapped another quarter round my neck.” The last line is swallowed up by the song’s hook, which is bound to tear up car stereos and dancefloors across the country.

This new single is the latest step in Shmurda’s glorious return, which also included a set at Rolling Loud New York in October, alongside stunning new tracks like “Splash” and “Cartier Lens.” Compared to earlier records where his bars were all brawn, coming down on listeners like boulders, his new work sounds icy and menacing, ensnaring the beat in intricate wordplay and tight-knit rhyme schemes. These moments follow his long-awaited February release from prison after six years in. He re-entered the rap world showered in praise, garnering profiles from GQ and Complex, but he stayed low, reacclimating and honing his craft.

The new music suggests a reinvigorated Bobby Shmurda more in touch with his pen and voice than ever. Finally, he’s fulfilling the potential he showed on classics like 2014’s “Hot N***a,” and the tracks found on his Gold-certified EP, Shmurda She Wrote. “Shmoney,” a turn-up anthem, shows off another side of Shmurda, celebratory and carefree for the first time in a long time. It’s a reminder that he’s back, but it also foreshadows all the thrilling places he’s still yet to go.