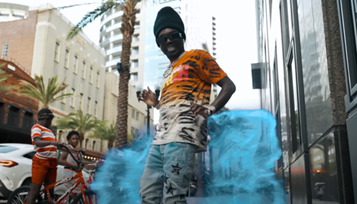 Roc Nation hip-hop artist Bobby Fishscale has officially debuted the music video release for his recently dropped single, “Made It.”

The track, produced by Mike WiLL Made-It signed producer Lifted, (prod. credits Pusha T, 2 Chainz, Freddie Gibbs, and more) reflects on the Florida-born rapper’s humble beginnings, overcoming obstacles from the hood, and his continued journey breaking through the rap game.

Shot by STBR, the “Made It” music video features Bobby rapping his verses in the streets of Miami. Iced out in jewelry and donning the hottest streetwear styles as a badge of his triumphant rise as a music artist, Bobby is spotted connecting with kids biking through the streets with the same aspirations as the Florida rapper.

Bobby’s “Made It” release falls on the heels of his famous series of Fishscale Friday freestyles released consistently earlier this year. The freestyles, which featured exclusive content every week, are underscored by the rapper’s spring iteration, “Big Fish.” The southern rapper has maintained a busy quarter making appearances on fellow Florida rapper Lil $o$o’s summer album and gracing the stages of some of the biggest festivals this year such as Rolling Loud NYC.