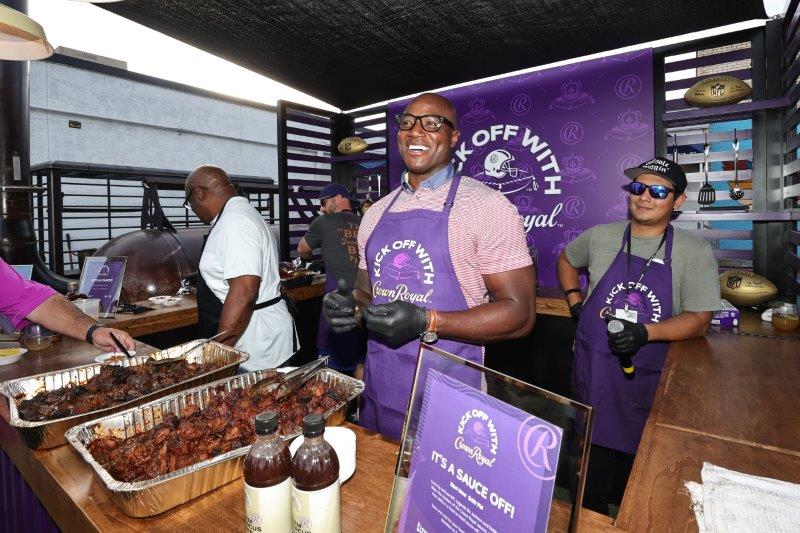 The Southern Smoke Foundation, a group established to care for food and beverage employees in need, received $25,000 from Crown Royal as part of the company’s multi-year NFL agreement, including the “Kick off with Crown Royal” campaign. The gift is a portion of the award-winning whisky’s $1 million pledge to support service members, veterans, and hotel employees throughout the NFL season.

In keeping with their promise to recognize individuals who assist fans enjoy gameday, Crown Royal, the NFL’s first-ever liquor sponsor, teamed up with NFL legends Bo Jackson and DeMarcus Ware for a cook-off at the Southern Smoke Festival. The Legends competed in a BBQ sauce competition after working with neighborhood Houston restaurateurs to develop two distinctive BBQ sauces flavored with Crown Royal. Voting by customers over the age of 21 for their preferred sauce helped the Foundation raise more money. Team DeMarcus Ware overcame an early deficit after Team Bo Jackson had taken the lead to win the competition for the greatest Crown Royal-infused sauce.

“We’re proud to continue to give back to the hospitality community, and extend our partnership with the Southern Smoke Foundation, who shares in our mission of helping those who help us celebrate gameday,” said Nicky Heckles, Vice President of Crown Royal. “This season, we’re excited to further our relationship with Houston and the greater-Texas community by giving back directly to the hospitality industry with Bo Jackson and DeMarcus Ware.”

Building on Diageo’s league sponsorship agreement, which went into effect for the 2021–22 NFL season, Crown Royal will continue its charitable efforts throughout the NFL season with activations in partner stadiums and towns that will assist those working in the hospitality sector. These initiatives will also include military veterans, a group that Crown Royal has sponsored for more than ten years through The Purple Bag Project and whose generosity has never been surpassed.

“We’re thrilled to continue our relationship with Crown Royal as we aim to inspire generosity towards the people who make gameday what it is—the bartenders, servers, dishwashers, and more who help us enjoy each and every NFL gameday,” said Kathryn Lott, Executive Director of Southern Smoke Foundation. “As we continue in our mission of helping our own, the food and beverage industry, we’re thankful to Crown Royal for their ongoing support of our efforts.”

In its first season as an official NFL sponsor, Crown Royal donated $1 million to more than twenty local and national charities that help underserved areas. To promote responsible drinking, the company also expanded its Crown Royal Water Break promotion and continued its Purple Bag Project by filling more than 200,000 Purple Bags for the military community.