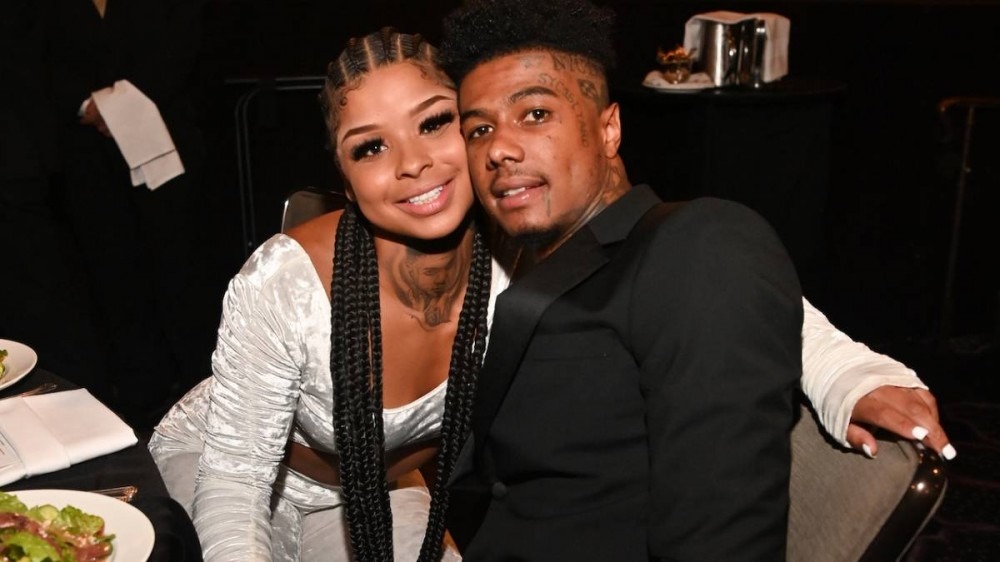 Blueface and Chrisean Rock seem to have once again gotten into a pretty serious scuffle, and fans are starting to get worried.

The notorious couple had previously made headlines on August 1 after they were seen on video getting into a vicious fight in Hollywood, California. Now just a little over two weeks later it seems the pair have gotten into another physical fight, this time resulting in a broken bathroom door and a chunk of hair missing from Chrisean Rock’s head.

Blueface took to his Instagram Story on Thursday (August 18) to showcase his partner’s new bald spot on the back of her head.

“She tried to run,” Blueface can be heard saying.

“Don’t show them my bald spot. Why do you wanna show people what you did to me?” Rock asks in reply, to which Blueface reiterates, “I didn’t do that to you, you tried to run.”

“Yeah, cause I had your phone,” Rock says. “You didn’t even want me to see what was in your phone.”

Rock then offers to show Blueface’s IG viewers “the rampage” and reveals a busted bathroom door completely off its hinges. Blueface claimed Rock had taken his phone and tried to hide in the bathroom when he chased after her.

Fans expressed concern over the social media footage, with many saying the couple were clearly toxic for each other, but Blueface’s mother Karlissa Saffold chimed in to accuse Chrisean Rock of lying. She said Rock’s injury had resulted from being jumped by a group of girls earlier in the week.

“Jonathan did not pull her hair out,” Saffold wrote on her IG Story. “Them girls who jumped her did. Y’all going too far with this fairytale. And those believing this is even more delusional then them, but carry on.”

She continued, “Looks like I lost my son to the internet. That million make you do something crazy.”

Meanwhile, Chrisean Rock took to Twitter to share her own feelings on the matter, and while she didn’t necessarily deny Blueface was responsible for her hair loss, she said those concerned should settle down since the hair would grow back anyway.

“Tht bald spot ain’t shit fr nobody hurt about a patch of hair,” she wrote. “It’ll grow back…Blueface is the best person in the world. I really don’t trust anyone but him.”

A fan chimed in to say that the “vibe” rapper should get out of the relationship while she “still has hair.”

“Nobody wanna leave somebody but sh*t you gonna die for him? He ain’t about to die for you,” the fan wrote.

“Girl stop believing the internet” Rock replied. “N yes I’ll die for him shit ain’t even like what y’all think.”

Blueface is the best person in the world. I really don’t trust anyone but him

Girl stop believing the internet n yes I’ll die for him shit ain’t even like what y’all think https://t.co/aaWHQ5cSOJ

Following the recorded street fight on August 1, Blueface had claimed the violence started when he found out Rock was sleeping with a Corrections Officer during her brief stint in jail back in May.

“Y’all barely know her,” the “Thotiana” rapper said in an Instagram video. “Went through her damn phone. She fuckin’ the CO at the damn jailhouse. She sending the CO the hotel, and he got a wife and she probably going to see this.”

The couple was again in conflict just a few days later when reports emerged that Blueface had welcomed a new child with his ex-girlfriend, Jaidyn Alexis. Chrisean Rock took the news especially hard, and fired off some troubling tweets that had fans worried she was suicidal.

“I’m drunk but on some real shit I’m hurting like a bitch,” she wrote. “This life shit ain’t for me. My mind in a rage I’m too young to feel dis pain…He disrespectful on so many levels.”