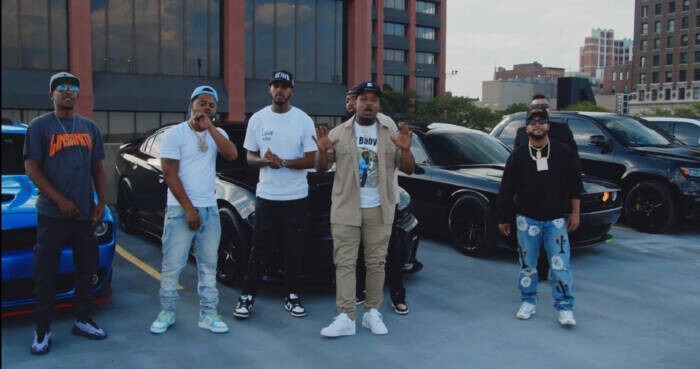 Benny The Butcher and his Black Soprano Family (BSF) have announced their biggest compilation project to date, Long Live DJ Shay, which will be released on 9-9-22.

After announcing the new album with the project’s smash lead single and video “Times Is Rough,” (produced by DJ Premier), Benny and BSF are back with “297 Parkside.”   The new single and video features Stove God Cooks and is produced by Camoflauge Monk.

“297 Parkside” is our wave on steroids.  An instant classic!” Benny The Butcher confidently asserts.  “The track title represents Shay; it’s a Buffalo thing.”

Long Live DJ Shay, is a celebration of the legacy and impact of DJ Shay (RIP), not only for BSF and Griselda, but his lasting impact on the culture.  Long Live DJ Shay is Benny’s Roc La Familia project, a warning shot for the streets that not only showcases himself and his label but more importantly his burgeoning roster of talent; and those closely associated with him.  Long Live DJ Shay features appearances and production from Benny and his BSF brethren along with Westside Gunn, Conway The Machine, Boldy James, Stove God Cooks, Krayzie Bone, Armani Caesar, DJ Premier, The Alchemist & Jansport J.

“Long Live DJ Shay!  We put so much into this knowing he is watching down on us, and I know this is gonna wake everyone up,” Benny The Butcher affirms.  “B$F is the biggest.  I promise you we them ones.  The album is top-notch; from production to the rhymes and it’s entirely mixed by the legendary Young Guru, so I know it’s gone pop out ya speakers the right way. “

No one questions Benny The Butcher’s stardom, but in 2021, he officially became an undisputed multi-hyphenate.  His acting debut in Griselda’s first foray into motion pictures, Conflicted, set off an influx of acting offers.  Benny also ushered in his new sports marketing agency, with clients consisting of NFL Players, BMX riders and freestyle skiers.  Further, Benny was tapped by his beloved Buffalo Bills to create the team’s theme song as they make a push for the Super Bowl and became an official team spokesperson.

Keeping the plugs happy, Benny’s The Plugs I Met 2 sequel not only exceeded fan expectations but was a press favorite; as it was included on EOY Best of 2021 lists from esteemed outlets such as New York Times, Complex, Stereogum, Spin, XXL and Hotnewhiphop (among many other esteemed outlets).  Perhaps, Benny’s biggest moment was the announcement of his new solo deal with Snoop Dogg’s newly helmed Def Jam Records; and in Snoop’s first act as Def Jam President, was his signing of Benny to lead the label’s reiteration.  That announcement lead to Snoop’s first Def Jam project Algorithm, which included Benny on the first-single “Murder Music” which also featured Jadakiss and Busta Rhymes.  To cap off his unparalleled run, Benny was nominated for BET’s “Best New Artist” award for 2022.

Benny’s Black Soprano Family (consisting of Rick Hyde, Heem, Loveboat Luciano, Young World, Flexxbabyy, Cristina Mackey and its newest signees Fuego Base and ELCamino) imprint has experienced similar success, as projects from Heem (Long Story Short), Rick Hyde (Plates 2 & Stima), and their most recent collective effort, Trust The Sopranos, all debuted in the top 10 on DSP’s, and resulted in a 300% percent growth for all BSF artists on DSP’s.

Long Live DJ Shay will be released on 9-9-22 via BSF/MNRK Music Group.