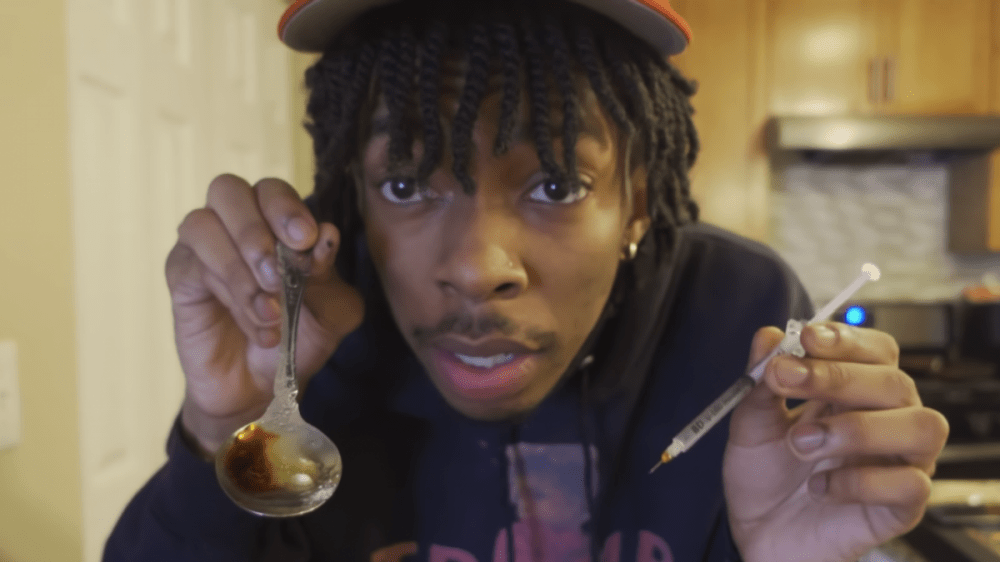 The 25-year-old rapper — best known for his collaborations with DJ Premier and the late MF DOOM — debuted his “Heroin Addiction” video on Tuesday (May 17), which brings a literal meaning to the song’s title.

The two-minute clip shows Nehru using a lighter to melt what appears to be heroin powder on a spoon, before loading the tar-like substance into a needle and injecting it into his forearm.

“On March 21, 2022, I decided to film myself trying heroin to note its short-term side effects,” a message reads. “Here’s what happened…” The video then shows the New York native slumped on his couch and walking around his apartment looking dazed, as well as throwing up in his bathroom.

The track itself — taken from Bishop Nehru’s upcoming project Heroin Addiction (out May 27) — is an alarming listen. “We like the highs, trying to find an escape/There’s plenty lost in the race, there’s a dragon to chase/It’ll all be straight, come get close to the bait/In the very worst cases, we’ll meet at the gates,” he raps over dark, trippy production.

The video comes with a disclaimer that reads, “This video was made for art purposes specifically! We at the Nehruvian family do not condone or promote the use of hard drugs, but we support & speaks for those effected [sic] who may not have a voice for themselves. If you ever need someone to talk to hit me in the Discord. Thank you.”

However, that didn’t stop Bishop Nehru from coming under fire on social media. “I’m not gon lie to you, There’s a lot of impressionable kids online. This aint the move bruh,” one fan replied, while another wrote, “Boy you need yo ass kicked you is not john coltrane.”

I’m not gon lie to you,
There’s a lot of impressionable kids online.
This aint the move bruh.

Others were more concerned for Bishop Nehru’s wellbeing, especially after recent tweets from the rapper indicating he’s currently going through a crisis.

“Sometimes I feel like the only way i’ll get peace is through death,” he tweeted on May 8. The following week he wrote, “The end couldn’t come any slower. When i go just know nobody fucked with me and I don’t fuck with nobody.”

Sometimes I feel like the only way i’ll get peace is through death.

The end couldn’t come any slower.

When i go just know nobody fucked with me and I don’t fuck with nobody.

While there’s no confirmation whether his heroin stunt was a legitimate cry for help or fake marketing tactic to plug his upcoming project, the video marks a bizarre development in Bishop Nehru’s career.

In 2013, a 17-year-old Nehru toured with Wu-Tang Clan before signing to Nas’ Mass Appeal Records and dropping NehruvianDOOM with the legendary MF DOOM the following year. Since then, he’s released a string of independent projects while collaborating with the likes of KAYTRANADA, Brady Watt and Lion Babe.