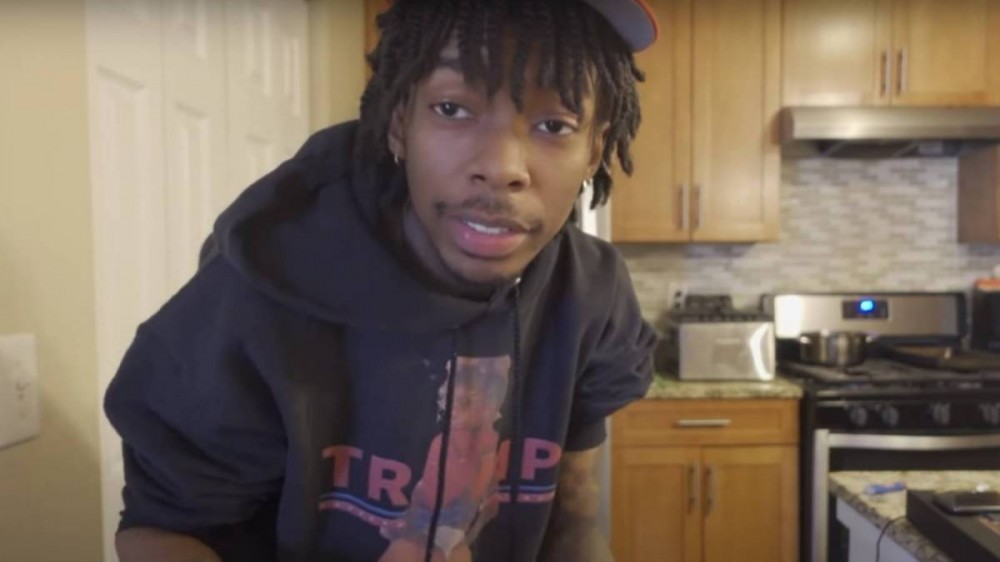 Exclusive – Bishop Nehru stirred up some controversy on Tuesday (May 17) when he shared a video for his latest single “Heroin Addiction.” As the title suggests, the visual finds the prodigious MC experimenting with shooting “heroin” into his veins using a needle, spoon and lighter. But rather than take it as a fictional work of visual art, many people truly believed Bishop injected the real thing in an attempt to rack up views — or as a call for help.

Compounding the matter were two tweets Bishop shared prior to its release that read: “The end couldn’t come any slower” and “When I go just know nobody fucked with me and I don’t fuck with nobody.” Naturally, his fans were worried about Bishop’s mental health, while others condemned him for putting such a jarring visual online for “impressionable” kids.

When i go just know nobody fucked with me and I don’t fuck with nobody.

In an interview with HipHopDX, Bishop Nehru — who came up with the late MF DOOM, Nas and DJ Premier as a teenager — assures everyone the tweets weren’t related to the video and furthermore, he didn’t actually do heroin.

“For the people who are concerned about my health and well being, I am fine,” he says. “Mentally, I’m 100 percent. I get a bit depressed, but we all do. As far as the tweets, they don’t have any relation to the video, just my personal feelings the day before.”

As for the attention the video has received, Bishop says it’s “pretty shocking” and insists his intention wasn’t to get views but rather communicate just how prevalent addiction issues are in not just Hip Hop but also society as a whole.

“I don’t want to say it’s funny, because some people are actually concerned, but I just feel like you’re overreacting,” he says. “It’s music video. You feel me?”

The idea for the “Heroin Addiction” came from a black-and-white documentary made in the 1960s about heroin. While watching it, Bishop realized so much of what they were saying back then still resonated today. In fact, opiate abuse is even more prevalent in the 21st century, with over 80,000 people fatally overdosing on the drug in 2021 alone. Even so, Bishop didn’t anticipate so much backlash.

“I see the things people are saying,” he says. “There’s a bunch of division between certain people. There’s some people who understand there’s something artistic behind it and they’re waiting to see what unfolds and what the message is. Then, there’s some people who think I’m a YouTuber, that don’t even know I’m a rapper. They’re like, ‘Yo, what  is this? YouTubers are doing anything nowadays.’ Those people I’m not really even focused on, because they don’t even know me.

“Then there are the people saying, ‘Oh, he’s doing this for clout and attention.’ The main one I’m honestly focused on is the group that understands there’s a message, but obviously to the losers who think I’m doing it for attention and clout, I have to address them. I feel like if anyone else had did something like this, they wouldn’t care, but because it’s me and I’ve worked with DOOM, I’ve worked with Nas and DJ Premier, they’re trying to make it seem like I’m disrespecting them by putting out my art.”

Bishop Nehru has noticed comments such as MF DOOM is “rolling in his grave” or “DOOM is disappointed in heaven,” but he doesn’t see the correlation.

“This has nothing to do with DOOM, so why would he even feel some type of way?” he asks. “The fact people are saying that, it lets me know that the world is very hypocritical. I am not making fun of addiction in no way shape or form. If anything, I’m bringing awareness to it.”

After Bishop takes the purported heroin, he spends his day nodding off on the couch, throwing up and laying in a fetal position — not exactly a picture of “fun.”

“The video is really a narrative film shot in 60 FPS,” he says. “It’s not a performance shot video. People are forgetting I direct my own stuff. I feel like people are taking it the way they are because it doesn’t look cinematic. I did that on purpose. I wanted it to look like a dude on YouTube, who’s a YouTuber, who’s addicted to making good YouTube videos.

“The twist on it is, there’s all forms of addiction, it’s not just heroin addiction. That’s just the strongest one, but you could be addicted to social media just as much as a person is addicted to heroin. It’s like, I’m going to post the video on YouTube, so why not show how certain contact creators are addicted to YouTube and will do anything for views?”

Bishop Nehru admits, however, he never thought it would get as much attention as it has in its first 24 hours: “Did I expect it to go super viral like that? No, not at all. Did I expect people to be concerned and think I was doing heroin? A hundred percent no.”

Bishop believes the controversy partially stems from the tweet he put out about the video, which read simply, “I tried Heroin in the new video.”

“I feel like it’s going viral on Twitter because people didn’t see the full video, you know what I’m saying?” he adds. “A lot of people are just seeing the clip, not clicking the video. Some don’t even know I’m a rapper.”

Bishop Nehru, who also describes the video as his own “This is Your Brain On Drugs” campaign that was prevalent in the 1980s, also notes there’s a disclaimer at the end of the video some people might’ve missed that encourages people to seek help and “NOT try this at home.”

It reads, “If you or someone around you is suffering from alcohol or drug addiction, please call the SAMSHA hotline at 1-800-662-4357 for confidential free help from public health agencies, to find substance abuse treatment and information.”

As for those accusing Bishop of doing the video for “clout,” he finds it rather hypocritical. He explains, “I’m trying to show these people on Twitter that act like they’re such cancel culture people, they’re frauds. They don’t really care about people — they just care about going viral, the same thing they’re saying that I care about.

“So it’s weird, I don’t really get it. It doesn’t make any sense. They’re trying to say I’m doing something to go viral, but you didn’t even watch the video and you retweeted it with a caption to try to make people laugh to go viral.”

Bishop Nehru plans to reveal more about his intention behind the visual when his EP, Heroin Addiction, drops on May 27 but for now, people will just have to come to their own conclusions.

“This was nothing more than a narrative film to show a certain perspective of drugs,” he concludes. “The heroin was used to show how people today in society are on codeine and pills and dying. There’s more to the message, but I want to leave it for the album.  The way that I did it with the heroin needle was just a harsher way of showing you this is what you’re like when you’re on these type of drugs.”