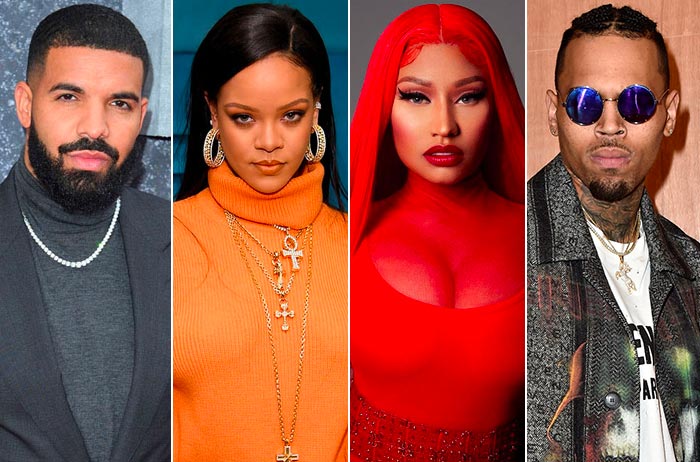 As the decade comes to a close, Billboard has revealed its top R&B/hip-hop artists of the 2010s, starting with Drake.

The Certified Lover Boy dominated the decade with a whopping 40 top 10 hits, seven of which reached No. 1. He also holds the record for most entries ever on the Billboard Hot 100 with 208.

He was followed by the unstoppable Rihanna, who released nine No. 1 Hot 100 hits this decade including “Rude Boy,” “What’s My Name,” “We Found Love,” and “Diamonds,” as well as her Eminem collaborations, “Love the Way You Lie” and “Monster.”

Chris Brown comes in third. The R&B superstar owned the charts with hits like “Look at Me Now” with Lil Wayne and Busta Rhymes, “No Guidance” featuring Drake, and “Loyal” with Lil Wayne and French Montana. Breezy’s decade-end stats include three No. 1 albums on the Billboard 200 and the eighth-most Hot 100 hits of all time with 96.

See who made the top 20 below.