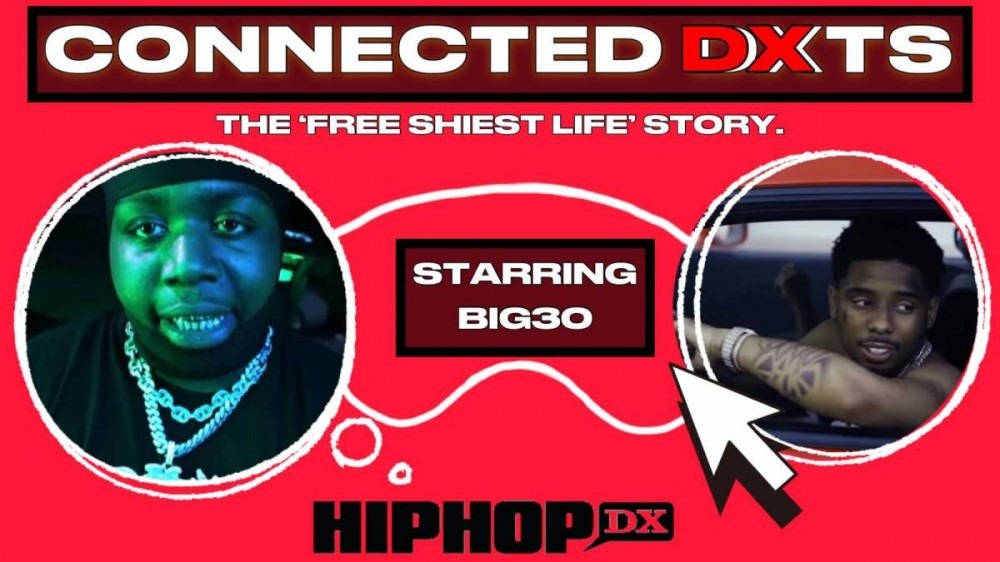 Memphis, TN – BIG30 is making a concentrated effort to keep Pooh Shiesty’s buzz alive in the streets despite his dire legal situation.

During his recent Connected DXTS interview with HipHopDX, BIG30 discussed the creative process behind his debut album King Of Killbranch, which peaked at No. 13 on the Billboard 200 Albums Chart and includes guest verses from artists such as Lil Durk, Future, Quavo, Moneybagg Yo, Pooh Shiesty and more.

While detailing the making of the projects’ lead “Free Shiest Life” single, BIG30 explained his intentions to act as a beacon for calls for his friend’s freedom, who turned himself in to authorities in Miami on June 8th and has since had his bond revoked until his upcoming trial.

“It’s just a movement till I see him to keep his name alive,” he said. “I just keep saying free him until I see him and shit.”

BIG30 also recounted the drowsy studio session behind the record, recalling how Pooh Shiesty actually gassed himself up to get on the track.

“If you talking about I had come up the song, how I get them on a song with them, little, few bars. The lil incident happened and had I had made a song about it, and I rapped it in front of him,” he said.

Seemingly rising from the dead, the “Shit Crazy” rapper said Pooh Shiesty defied the odds and made his way into the booth to punch in on the record, only to fall short of his goal of recording a full verse.

“So boom, he get up, cause he trying to prove me wrong so bad because I just told him, ‘Bro, you too, high you ain’t finna get on.’ He get, go straight in to the booth,” BIG30 recanted.

“He laid down about five, six bars and fell asleep in the booth. I come and get them out, I’m like, ‘Come on let’s roll’. But I told him, save the song gone come back and finish it. Well, you know what I’m saying? Shit ain’t happen, man. We ain’t no good chance to go back and finish. I just put it out like that.”

In the Jordan Spencer-directed video for “Free Shiest Life,” Big30 commemorates Pooh Shiesty’s unfinished verse with a photo collage cameo to fill in for his absence as he continues to fight multiple charges.

Among them, include several stemming from a 2020 armed robbery in Bay Harbor Islands, and a separate Florida shooting case — which took place this past Memorial Day Weekend, in which the 21-year-old allegedly shot a security guard in the ankle.

Regardless of the legal turmoil the Shiesty Season lyricist faces, BIG30 says Pooh Shiesty is in good spirits.

“He be texting me on the little computer they got in there. I guess they got a computer in there and they go out and text. We get like a couple of texts, for about an hour. He doing good, he in there getting healthy and shit, sobering up. He good though, he decent and finna bounce back out soon.”

The Memphis native also maintains that he and his fellow “Neighbors,” collaborator have no shortage of heat in the vault and even teased the possibility of a joint mixtape in the near future.

“The collab tape, that shit still coming,” he declared.