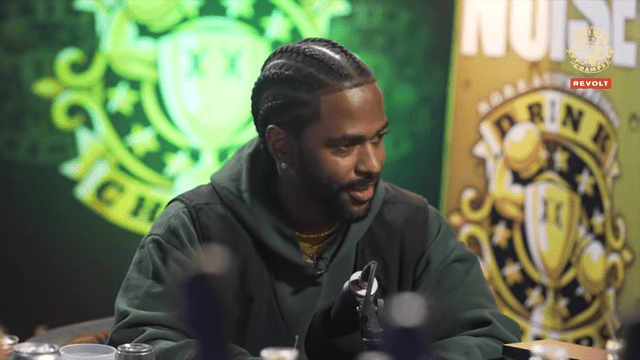 Kanye West had one of the most epic interviews on N.O.R.E’s and Dj Efins ‘Drink Champs’ podcast. One of the primary victims of Ye’s verbal attacks in the interview was Big Sean, where Kanye said signing Sean to his G.O.O.D Music label was one of the worst things he had ever done.

Immediately after hearing this, Big Sean said he was eager to share his views on Ye at Drink Champs as soon as possible. A month later, the interview is finally out.

Big Sean let spilled all the tea during the interview, touching on his multiple dramatic happenings with Ye over his career, including being pressured to fire a friend of his, auditing G.O.O.D Music for money he is owed, and Ye reaching out to reconcile after his Drink Champs interview aired.

One of the most eye-popping moments is when Sean discussed Kanye’s relationship with Drake, which is now in good standing after a rocky previous few years. While Big Sean is happy to see Ye and Drake reunited as friends via the “Free Larry Hoover” show, he felt that Kanye had much more affinity for Drake than him even while they were beefing, although Sean was always much more loyal to Ye:

“It’s not all about the money. It’s the principal. I haven’t done a “7 AM On Bridle Path,” I haven’t put it in nothing. I had an issue with all the respect being paid to somebody who publicly did that. And I know people be going through things, making up and that’s beautiful. I want to see my brothers together, but to me, I take that personal.”

According to HotNewHipHop Big Sean also explained that Kanye forced him to add his verse to Sean’s 2015 hit “Blessings” with Drake was the first instance of Drake being irritated by Ye’s antics.

Kanye can tend to rub people the wrong way, and surely Big Sean has been around him enough in his career to go through issues with Ye on a few occasions.