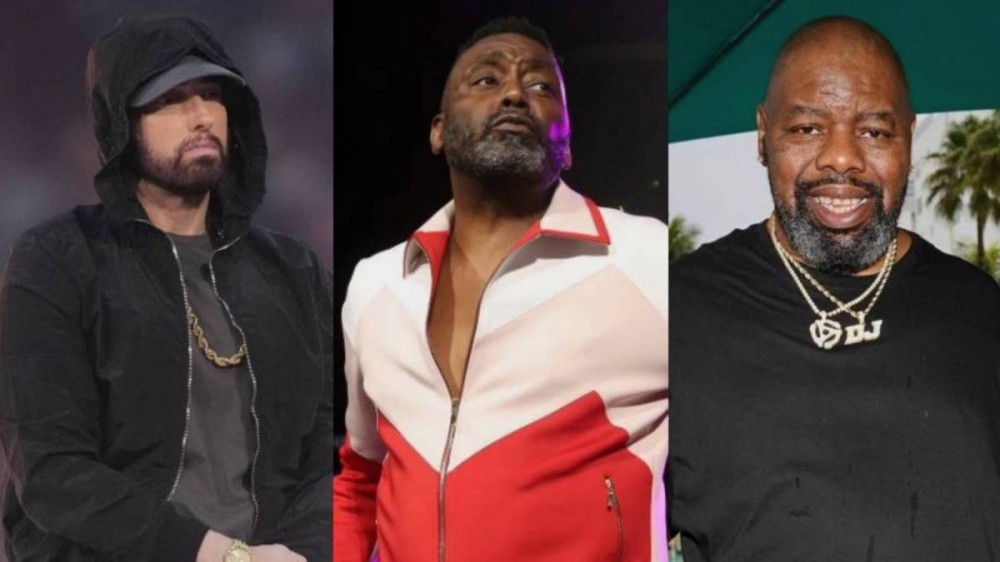 Big Daddy Kane has shared a throwback video of the late Biz Markie surprising Eminem during a surprise birthday party in his hometown of Detroit.

The heartwarming video shows a young Em on stage at St. Andrews in 2003. During his performance, the crowd erupts into cheers as Biz Markie and Big Daddy Kane come lumbering out to the stage.

Eminem is visibly shocked by the appearance of his Juice Crew idols and goes over to give Proof a hug for helping to make the surreal moment happen. “That time me and Biz performed for Eminem Birthday Party,” Kane captioned the video on Instagram. “R.I.P. Biz Markie. R.I.P. Proof. Much love to @eminem.”

Eminem has always shown appreciation for the rap artists that came before him and is known to have garnered an unmatched cassette collection filled with numerous Hip Hop classics.

In an interview with KXNG Crooked for his Crook’s Corner YouTube series back in 2020, the Detroit legend said the only reason he stuck around despite the backlash against him being white was because he loved Hip Hop so passionately.

“I’m so in love with this art form and I’m so passionate about it because it really was the only thing I was good at, aside from basketball,” Em said. “I just love it. I love to watch the YBN Cordaes come up, like, ‘Oh shit, he’s gonna be the next.’ It’s the same shit when I listen to one of your songs. I get anxiety. It’s fucking nerve-racking.”

Em recently shouted out Biz Markie for competing in his #Godzillachallenge back in 2020, in which rappers would attempt to spit more than the 224 words Em spit in 31 seconds on his song “Godzilla.” Biz came hard, clowning Em’s flow on the song while a guest on LL Cool J’s SiriusXM show Rock The Bells Radio.

Biz Markie passed away on July 17, 2021 after losing his fight with Type II Diabetes. According toTMZ, the beatboxing rap pioneer passed away at a Baltimore, Maryland hospital at 6:25 p.m. local time. His wife Tara Hall was reportedly with him when he passed and held his hand until he drew his final breath.

The Juice Crew talent had been the subject of numerous false death rumors over the years, but a source close to the family informed HipHopDX: “Sadly, this time it’s true.”

The 57-year-old rapper had gotten his start in New York City before relocating to Washington D.C. In 1988, where he dropped his debut Goin Off, which included the singles “Make The Music With Your Mouth, Biz,” “Nobody Beats The Biz”, “Vapors” and “Pickin’ Boogers.” His 1989 sophomore album The Biz Never Sleeps broke him through to the masses due in part to the success of his single “Just A Friend.” The track reached No. 9 on the Billboard Hot 100, while the album peaked at No. 66 on the Billboard 200.

Big Daddy Kane was close with Biz up until his death, with the “Smooth Operator” MC usually being the one to debunk death rumors surrounding his old friend. When Biz finally did pass, he penned a moving eulogy to him, and thanked the Clown Prince of Hip Hop for believing in his vision.

“Thank you for believing in me,” he wrote in the caption. “Thank you for giving me a career. Thank you for the beats to ‘Ain’t No Half Steppin,’ ‘Warm It Up Kane’ and convincing @thereal45king to give me the beat to ‘Set It Of.’ Most importantly, thanks for being a true, genuine, loving FRIEND!!!! LOVE YOU FOREVER EMAZA!!!”