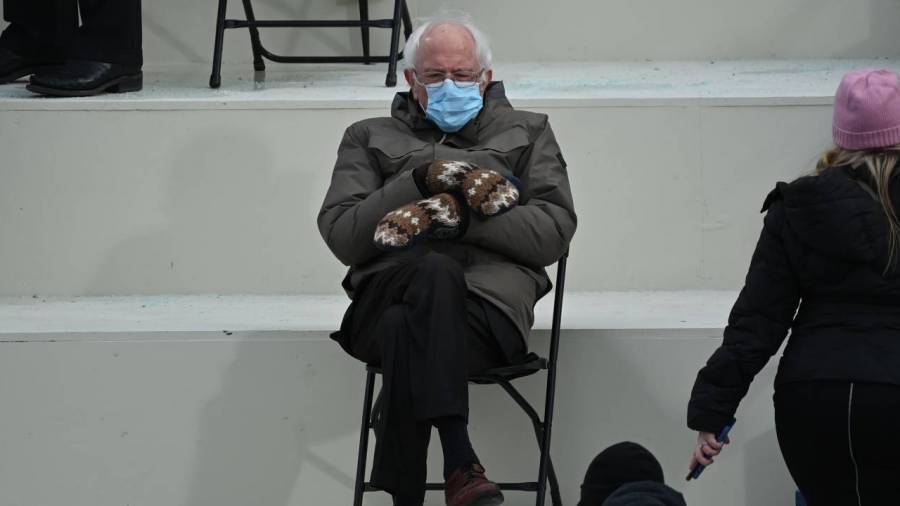 WASHINGTON, D.C. – At Joe Biden’s Presidential Inauguration on Wednesday (January 20), there were a few standout moments that sent social media into a craze such as Jennifer Lopez’s performance, an Air Jordan 1 “Dior” sighting and Bernie Sanders’ cozy jacket and patterned mittens, which stole the show.

Senator Sanders immediately became the latest meme as the photo pictured above began making the social media rounds as he was then Photoshopped into just about everything including album covers. Hip Hop got involved and began slapping the U.S. Rep on an array of classic LPs, which fans got a kick out of.

J. Cole even got in on the madness on Thursday (January 21) by swapping the Vermont senator onto the cover of his breakout 2014 Forest Hills Drive album with a pair of his upcoming Puma DREAMER 2 kicks.

“Fixed,” he wrote with a series of laughing and cloud emojis.

Others made by fans threw Sanders on Kanye West’s The College Dropout, Drake’s More Life, Kendrick Lamar’s To Pimp A Butterfly, Travis Scott’s Astroworld, Mac Miller’s Swimming and many more.

Check out all of the Bernie Sanders rap album swaps below.

Bernie was jus passin thru pic.twitter.com/qI2pHAi1wq

watching tv with the sound off (ft. Bernie) pic.twitter.com/pierM3c80T