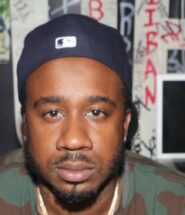 While basking in the glow of his beloved Buffalo Bills advancing to the AFC Championship Game for the first time since the 1993 season, Benny took to his Instagram stories on Sunday (January 17) and clarified the difference between so-called “street n-ggas” and regular people.

“You n-ggas who be in the comments, running ya mouth thinkin’ y’all know everything? Swearing y’all street n-ggas? That’s rule No. 1, a street n-gga never speak on shit he know nothin’ about,” Benny said while perfectly balancing a blunt in his mouth. “And y’all n-ggas think a n-gga ‘sposed to post every aspect of his life? C’mon man, y’all n-ggas can’t be in the streets forreal. Stop that.”

The Butcher’s tenor is similar to his “3:30 In Houston” track released in December of 2020 following . He uses the 3-minute track to let off steam about nameless enemies, Wendy Williams, gossip bloggers and more.”

“That’s why I really can’t stand you suckers, go to Instagram but won’t handle nothin’,” he raps on the song. “3:30 In Houston” appears on the Conflicted soundtrack featuring Smoke DZA, Wale, Westside Gunn and more.