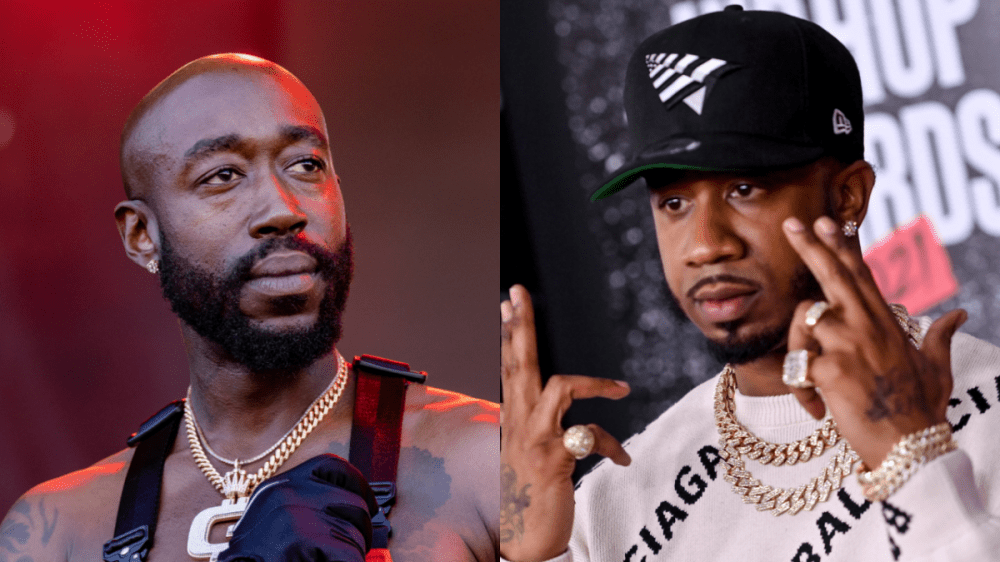 Benny The Butcher‘s has called out Freddie Gibbs with a series of threats while rocking what appears to be one of Gibbs’ “G” chains.

The BSF rapper posted a video of his chains to his Instagram Story earlier this week which featured one of Gangsta Gibbs’ chains, possibly snatched during their May brawl in Buffalo at a Dinosaur Bar-B-Que.

The Indiana native got wind of Benny’s “jewelry cleaning day” clip and responded directly taking several shots at the Griselda rapper on his own Instagram Story on Tuesday (August 23).

“Benny gay ass need to stop flexing because he was there and didn’t throw a punch,” he wrote. “Hoe ass n-ggas did all that brought a camera man and all for promo. Still can’t pack a room. Go ahead start rapping about me so I can start about these sealed plea agreements and shit.”

Benny then responded by posting a video wearing the “G” chain and warning Gibbs that if he continued to talk, he could suffer a similar fate to what allegedly took place in May.

“Ayo, MC Dinosaur Bar-B-Que. That’s what got your head punched in the first time,” he said. “Talking about shit you ain’t have nothing to do with. Real shit. N-ggas dragged you by your chain. N-ggas took this [chain] off your bitch neck. You pussy, n-gga.

“MC Dinosaur Bar-B-Que, you been getting ran down on n-ggas for the past year without a gun. You a bitch. MC Dinosaur Bar-B-Que, n-ggas punched yo head all in — had you fucking lumped up with stitches all in yo shit for running your mouth like you doing now. Remember that? Then you went next day and bought that cheap-ass Cartier watch.”

Freddie Gibbs doesn’t seem too worried about Benny’s threats as he continued to post about the Buffalo native on his Instagram Story while trolling him about his November 2020 shooting at a Houston Walmart.

“Y’all n-ggas more jewelry on the streets than on ya neck,” he replied. “N-ggaz walked u to the car and took yo strap, and yo jewelry and shot u? Damn.

“When all yo homies was trying jump me I heard y’all saying ‘shoot him, shoot him’ but ain’t none of y’all have the nuts.”

The former collaborators began exchanging disses on social media in March, which led to Gibbs and Benny’s crew getting involved in an altercation in May while Gibbs was in Buffalo on tour.

Benny’s latest comments come after he questioned the respect and street credibility of other rappers last month.

“I’m just saying go to Buffalo and ask about me and my n-ggas and then go to these rappers’ city and ask about them and their n-ggas,” Benny said in an Instagram Stories video. “You might be disappointed in them n-ggas man.”