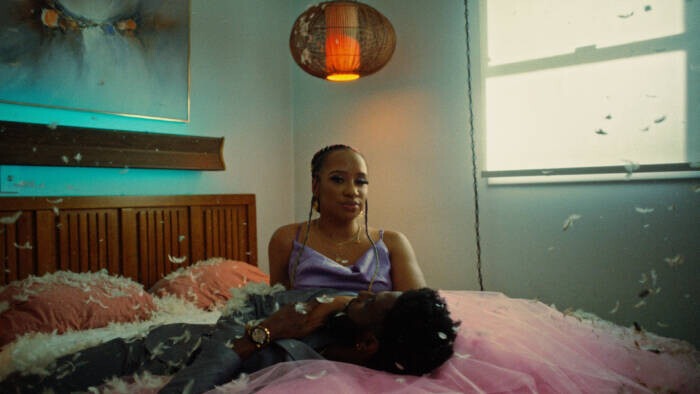 Singer-songwriter BeMyFiasco released her lauded debut album Where I Left You via +FE Music/EMPIRE on October 15, 2021. Today (6/8/2022), the stylish, celebratory music video for the album’s Little Brother-assisted “Outside The Lines” exclusively premiered via BET Soul and is now available on YouTube. Directed by husband and wife duo Office Romance (Andrew Klein and Effie Speridakos) and executive produced by Phonte, the video demonstrates the vibrant and infectious qualities of love, as BeMyFiasco and her love interest (played by NC artist Sonny Miles) effectively transform the energy of a house party.

“When we first heard ‘Outside the Lines’, it gave such sweet, warm energy that grew each time we listened to it. We wanted to show the transformative power of real love as it turned this lame party into a full vibe. It was a dream to work with this team and we’re so grateful to have been a part of it.” – Office Romance
“‘Outside the Lines’ is about taking risks and allowing yourself to be vulnerable when it comes to your heart. It’s a song that encourages self-love and exploration within a relationship while also acknowledging the discomfort of the journey. Working with Effie and Andrew [for the song’s video] was a dream… It was important that the video capture the warmth and energy of the song. To enhance to the experience, we also reached out to other black and brown creatives around the area.” – BeMyFiasco
“This is the first video I’ve executive produced. It was a big challenge for me, but I’m just thankful that we came out with something beautiful.” – Phonte
Watch the “Outside The Lines” on YouTube here.

Check out the exclusive BET Soul premiere of “Outside The Lines” here, and catch the video airing on the cable network throughout the day.

The “Outside The Lines” video arrives on the heels of the inclusion of Little Brother‘s seminal debut album The Listening in Rolling Stone’s list of the “200 Greatest Hip-Hop Albums Of All Time“. With guest features from Little Brother, Devin Morrison, Carlitta Durand, and Darien Brockington; and production from Tall Black Guy, Roho, among others, Where I Left You was intended by executive producer Phonte to serve as a love letter to the work of Timbaland, Missy Elliott, and the Swing Mob. Aaliyah is one of BeMyFiasco’s earliest and most prominent influences, making the album a full-circle moment.

Stream/purchase Where I Left You here.