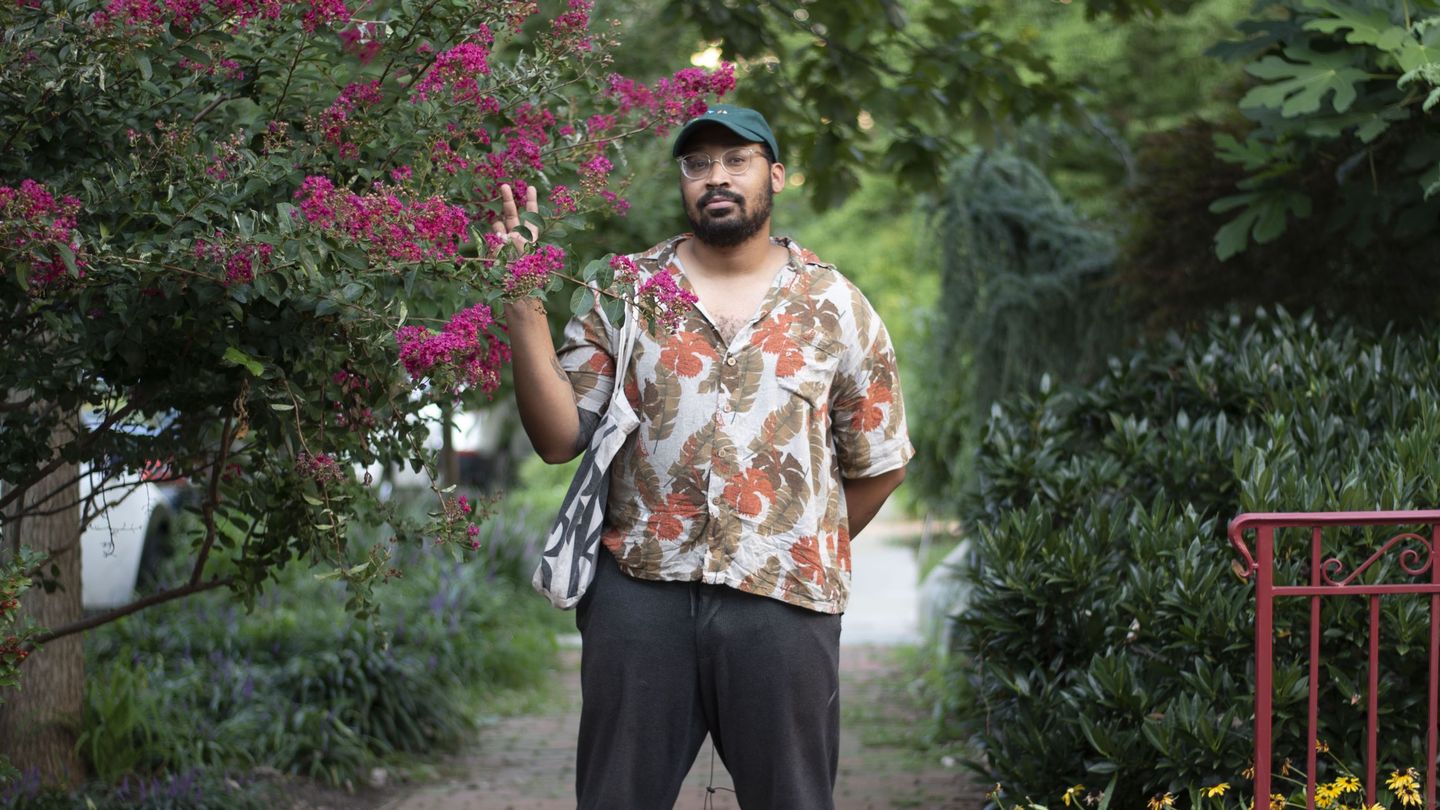 Over a span of five years, friends and bandmates pulled musician Bartees Cox Jr. aside to tell him, You need to quit those bands you’re in and start your own. “I had multiple friends who were like, dude, what are you doing? You’ve got to focus on your own stuff,” Bartees recalls as we talk on the phone early in September. “I was like, no, it’s not good enough.” He had put himself in a box.

His main gig was as guitarist and vocalist in a New York-based emo quartet called Stay Inside, founded in 2016 when future bandmate Chris Johns answered Bartees’s Craigslist ad, and they discovered they had the same birthday. “I was like, oh, wow, super cosmic, we’re both Aquariuses,” Bartees says. Along with Vishnu Anantha and Bryn Nieboer, who worked with Bartees at a 3-D printing company, they started churning out noisy, idiosyncratic post-hardcore anthems and played what Bartees considers some of the best shows of his life.

But in 2020, Bartees stands on his own under the name Bartees Strange. His debut album Live Forever, out October 2 on Memory Music, proves that his friends and bandmates were right; he is at his most powerful when he is in full control of his art, and when he is refusing to be put in a box or categorized as a genre. From the energetic, post-punk essence of “Mustang” to the poignant, acoustic ambiance of “Far,” the album inhabits a multitude of sonic spaces, including rap on infectious tracks like “Kelly Rowland” and “Boomer.” Still, it took a lot to get to this point.

His eclectic musical background helps to explain the diversity of Live Forever. Bartees grew up in Oklahoma around music, surrounded by “church choirs, country music, and hardcore bands,” as the press release puts it, since he was young. “I could hear similarities,” he says about the three. “I always felt like I wanted to show how they were connected to my friends.” His heart, though, belonged to the Midwest emo scene: “When I started rolling around with friends in high school and meeting punks and hardcore kids and people playing thrash, I felt like I fit in somewhere,” he explains because, in the punk community, no one is interested in boxes or limitations — the point is to go against the current, to do something new. “Everyone looked crazy. Everyone had piercings in their face and crazy hair and they were drug addicts and people dealing with shit like I was dealing with shit. No one was staring at me all of the time.”

Something clicked in the midst of the madness of hardcore. “To see people break form and make sound without really knowing how to use their instruments was really refreshing and showed me how lawless creation could be,” he says. “I fell in love with that.”

His temptation toward this “lawless creation” contrasted with his previous notion of what he was supposed to be. He worked intense jobs in New York — where he moved in 2016 — felt drained, and ultimately hated himself. This caused tension for years. “I was trying to be this successful, young, smart, Black person that is just kind of a fairytale,” he says. Things were off musically, also: “Brooklyn was an amazing place to play and learn, but I didn’t think anyone was gonna hear my music if I stayed there,” he says. “It’s too noisy. I kept getting distracted. I wanted to play in every band and I want to record every person and produce every little thing. It’s impossible not to get caught up in the rat race.”

One day, he got to his job in Midtown Manhattan to find it swarmed with police and fire trucks. Two people — a married couple whom Bartees was friendly with because they owned the office next to his — had jumped out the window. “I had just seen them the day before, and then they were dead,” Bartees says. The opening lyrics of the extravagant “Mustang” are his poetic contemplations on this moment: “A man bled out this morning, I’m the antecedent / This was not the first time I fell in my arms.” He translates: “I felt like I hadn’t done enough for someone who passed away. Those feelings go back to when I was very young and losing people who I wish I would’ve been there for.”

He left New York for Washington, D.C. on a mission. “I started slowly rearranging my life,” he says, giving himself over to that lawless creation and giving up on what he presumed was expected of him. After five years of advice and encouragement, he finally started his own band, Bartees and the Strange Fruit, later to unfurl as Bartees Strange.

Even before Live Forever’s release, Bartees Strange has become a known quantity. The groundwork was laid earlier this year on his first EP, Say Goodbye to Pretty Boy, a set of covers of songs by ornate indie-rock stalwarts The National. His reverence for the source material blended with a bold reimagining of it, earning praise from frontman Matt Berninger, Hayley Williams, and even more surprisingly, Ryan Reynolds. “Uh, no, I didn’t expect any of that, at all,” Bartees says, bursting into laughter, and then giving the chaser: “Ryan Reynolds sent me a selfie this morning.” He is in a seemingly never-ending state of bewilderment, and reasonably so.

And it’s not just that Bartees’s National covers are good; they prove something. “I was really trying to assert that the way the music industry exists — that there are so few successful Black rock bands or Black indie bands that have had careers like The National — is a problem, considering our contributions,” he explains. “It’s, like, really fucked up.”

This idea carries over into Live Forever. On the intense “Mossblerd,” which Bartees describes as the “mission statement of the record,” he reckons with representation in not only the music scene but in life. It’s about the limitations of genres, stressing “how important it is that contributions from Black artists in rock, and other spaces that aren’t stereotypical, are normalized.” But the word genre works on a larger level — “like a stereotype, almost like a role you’ve been assigned,” Bartees says — especially when he raps about the incarceration of his older brother.

“If you grow up and you live in a poor neighborhood and you’re Black,” says Bartees, “and the only things you’ve seen on TV and the only songs you’ve heard and the only examples you’ve ever seen are poor Black people or crime or horrible news stories — in my mind, they all roll up into a genre.” He laments how his nephew, his older brother’s son, is inevitably falling prey to this cycle that is almost impossible to break: “I see that he’s a brilliant kid and has so much to offer, but he’s only seen what these genres tell him he is. And it limits him.”

Live Forever is, in many ways, Bartees transcending the boxes he’s been put in. He learned how to engineer and produce to overcome his struggle with bringing his visions to life; he accepted his fate as an artist rather than working a stable, prestigious job that he felt pressured to hold; he is asserting his place in a music scene where he rarely sees representation. “I want to fly close to the sun, too, even if I flame out,” he says. The 11 tracks that make up Live Forever show Bartees in flight; he is free and ambitious, dipping in and out of indie rock, rap, and jazz — exploring as much territory as possible in order to express himself.

“There are so many things that are so completely uncontrollable,” Bartees says, “but I feel like making this record was an exercise in learning more about who I am. I can build any world I want — whatever music, whatever art, whatever I want to make,” and he adds, “even if it doesn’t fit into a little box.”