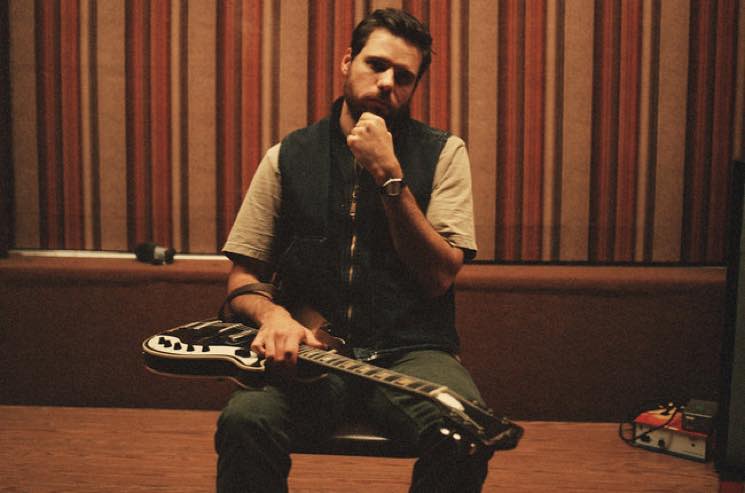 Fatherhood has proven to be powerful muse for Afie Jurvanen, but not in the way you might expect. "Bad Boys Need Love Too" — a funky, slow burning highlight from the singer/songwriter's new LP Earthtones— works not as a dedication to his own young children, but instead all the neglectful dads out there, especially his own.

"I spent a lot time angry with my dad because he wasn't around when I was growing up, and now that I have my own kids, I get a second chance in a sense," Jurvanen (better known as Bahamas)  tells Exclaim! Of "Bad Boys Need Love Too," he adds: "If there was now an opportunity for me to reach out to him, I'd say 'You're an asshole, but I love you anyway.' And we can build on that."

While the lyrics and themes were inspired by the elder Jurvanen (who has since passed) the music and writing process can be attributed, in a way, to the next generation. "The biggest challenge being a father is I just have no time," he says raising his young daughters. "I, course, love them so deeply and am not complaining. But let's just say it was fun, for this new album, learning how to write songs really efficiently."

"Bad Boys Need Love Too" is a perfect example — he wrote it without a guitar, instead clapping the beat with his hands and singing the chorus to himself. Later, he brought that kernel into the studio with his touring band to flesh out the rest the track on the spot, without any further planning. He says that approach gave the song a unique rawness, and "you can hear how we're all on the edge their seats from start to finish."

It's a huge creative leap forward for Jurvanen, especially compared to his prior, more conventionally indie folk releases like 2014's Bahamas Is Afie. But that breakthrough didn't come easy. The smash success … Afie (which won two Juno Awards and was long-listed for the 2015 Polaris Music Prize) led to a whirlwind tour that was fulfilling until it became exhausting. "I have two young kids and I'd been touring all the time, and in a clichéd way I got physically exhausted to the point where my musical ideas were tired," he explains. "There just wasn't anything that was exciting me."

The notion following up that 2014 release with another folkie LP especially irked Jurvanen at that point. Jurvanen's folk fatigue prompted him to fhandedly asked his manager about the availability   the players f one his favourite recent LP's: Black Messiah by D'Angelo and his backing band, the Vanguard. Thankfully two members that band, session veterans James Gadson and Pino Palladino, were available and agreed to meet with Jurvanen at a studio in Los Angeles.

"It was just a pure elemental connection," Jurvanen says the eclectic new direction that Gadson and Palladino pushed him in. And though his penchant for strict time management as a young dad was leading him toward such direct songwriting anyway, Jurvanen is grateful that the elder musicians helped him enrich that sentiment all the more on Earthtones.

"In the past, I sometimes spent years working on a song, but this album is much more direct and elemental. There isn't even any reverb or anything to obscure the sounds," Jurvanen says. "Of course, some songs require more effort than others. But now, if something doesn't feel good in the studio, I take it a sign to move on. There's enough things in life that don't feel good — working on music shouldn't be one them."