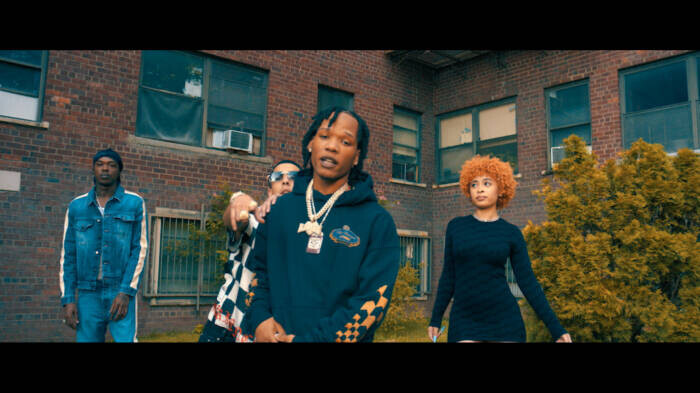 With an authoritative mic presence and a soldier’s mentality, rapper B-Lovee crafts booming bangers for the New York City streets. Continuing his momentum of hard-hitting heaters, the RECORDS/Columbia Records signee shares the visuals to “One Time”, his relentless new melodic cut with Ice Spice, J.I. and Skillibeng; watch HERE.

With a guitar-strings driven beat courtesy of Yung Lan, Najee Travis, and Dos Dias, B-Lovee dances between smooth 808s and syncopated snaps as he comes through with colorfully aggressive bars. In the video directed by Rock Davis, Lovee, Spice, J.I., and Skillibeng alternate between natural shots posted up on the block surround by cars, women and in the halls of the project housing.

“One Time” is the latest in a long line of fiery video from the 21-year-old-artist who’s been steadily growing in popularity since he dropped his first viral single “IYKYK” in 2020. Earlier this summer, B-Lovee released the visuals for “Wicked”, “Hit List”, “Demon” featuring Coi Leray and his latest project ‘Misunderstood’. The 8-track effort features exhilarating singles like “Need You (Last Strike)” which samples Nelly’s classic “Dilemma”, “IYKYK”, “Don’t Change” and the “My Everything” remix from Highbridge rapper A Boogie Wit da Hoodie. After being named Artist To Watch in 2022 by Billboard & Spotify’s Most Necessary, racking up 150 million streams across his growing catalog and earning a spot on this year’s Rolling Loud Miami & New York, Hot 97’s Summer Jam, B-Lovee is well upon his way. Stay tuned for much more from the buzzing young emcee in the coming weeks and months, including more high-profile collaborations and music videos.

Fans can get tickets to The Courtlandt Baby Tour available at: https://www.bloveeofficial.com/