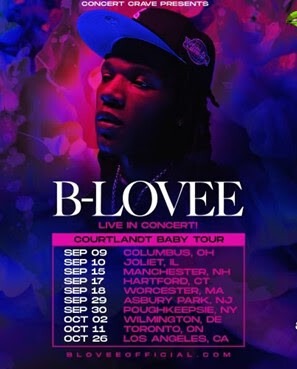 The 10-city tour produced by Concert Crave will kick off September 9th at Skullys in Columbus, Ohio and make stops at major theaters around the U.S. before wrapping up October 26nd at The Echo in Los Angeles. Featuring special guests, fans can check out tickets for the Courtlandt Baby Tour at https://www.bloveeofficial.com/.

The tour announcement follows the release of several bangers from Lovee including “Shottas”, Coi-Leray assisted “Demon” and his 8-track project Misunderstood which features previously released singles “My Everything” I.Y.K.Y.K”, “Don’t Change” and “Boom Boom” featuring A Boogie with Da Hoodie.