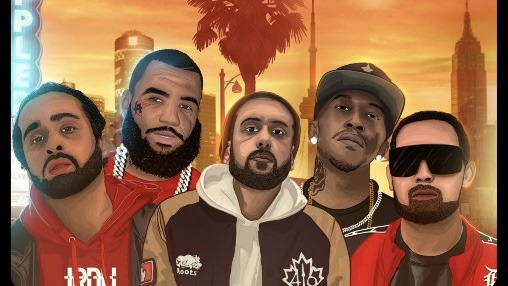 Great achievers have a sense of destiny, and a burning passion to leave a legacy. For artists, their music is their legacy. It’s a piece of “immortality” that will stand forever. Toronto, Canada based Hip Hop juggernaut Azeem Haq has greatly contributed to his legacy with his new single entitled “My City,” which features world renowned artists, The Game, Lazarus, Fredro Starr and JRDN. Azeem’s witty metaphors paint precise pictures. And his cadence and penmanship are top-notch

The song is a torrent of lyrical prowess. Each artist delivers ferocious braggadocious lyrics that pay homage to their individual city. As alway, The Game’s delivery is top notch as he serenades the city of LA with raw and captivating lyricism.  Up next is Detroit rap sensation Lazarus. The MDMC effortlessly shifts his voice into the beat so that it acts as an additional instrument within the song. As well, the “My City” video features a special appearance by Swifty from D12.

Nova Scotia born JRDN utilizes his magnetic delivery, efficient wordplay and irresistible personality to capture the essence of his city. Moreover, Fedro Starr’s animated flow and hard core, gritty lyrics bring the flavor of New York City to life. “My City” has an infectious hook. The song is a tour de force loaded with dynamic flows and sharp rhymes. It’s a solid effort that fully exhibits Azeem Haq’s passion and dedication to his craft.