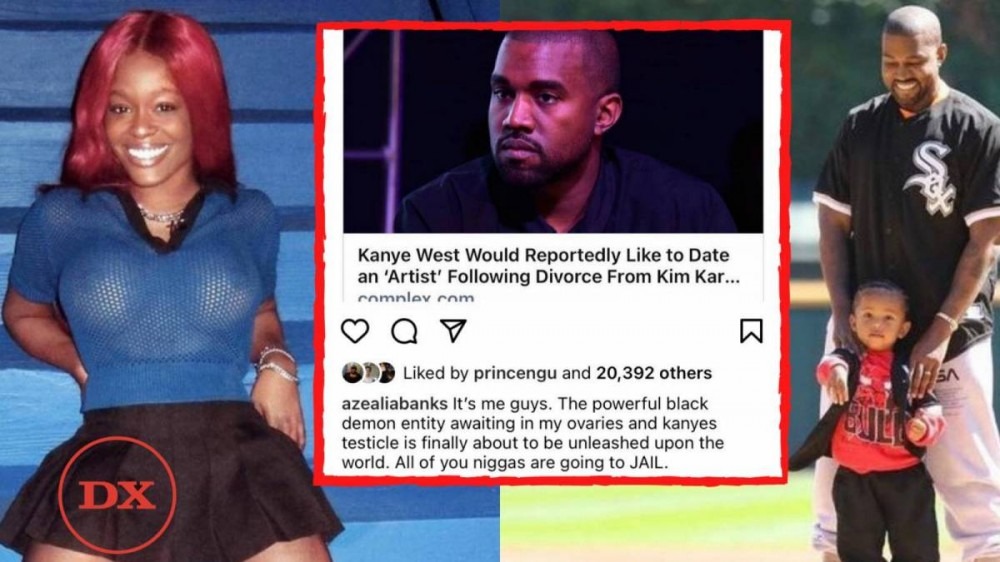 Even though Kanye West is in the midst of a divorce from Kim Kardashian West, after being married for over six years, Azealia Banks is unapologetically ready to procreate with the YEEZY mastermind.

In a Instagram post on Saturday (April 17), Azealia Banks shared a screenshot of an tweet from Complex Music which reportedly asserts Kanye West is already looking for his next partner in the form of an artist that, “speaks the same language” as him — and Banks is convinced she is the suitor Mr. West is searching for.

“It’s me guys. The powerful black demon entity awaiting in my ovaries and Kanyes testicle is finally about to be unleashed upon the world. All of you niggas are going to JAIL,” Azealia Banks spouted off in the caption.

The “Six Flags” rapper went into depth about her vision of a life with Kanye after conceiving their hypothetical love-child, revealing her high expectations for their offspring along with predictions for the zodiac sign of the baby and the being’s impact on the world.

“I just want to be the mother of a fully African Azealia Banks X Kanye West child,” Banks wrote in-part in one of her comments.

“We would most likely have a Sagittarius baby as payback for the both of us talking shit about JAY-Z,” she continued before finishing, “We would make the art world stop. It would be another 50 years before anyone was adept enough to cause a shift.”

Azealia Bank’s Kanye West-fueled baby fever is somewhat of a surprise, but not because of her previous judgements about Ye. Banks was presumed to be off the market, after she announced her engagement to Jewish-American artist Ryder Ripps, back in February.

According to Insider, the pair called it quits last month after a whirlwind romance culminated in the creation of a 24-minute audio sex tape NFT of their intimate relations — which was originally sold by Banks for $17,000 before being listed for resale with a massive $260 million dollar price tag.

Even if we blockout the news of the breakup, Azealia Banks must have had a drastic change of heart regarding her feelings about Kanye West, because on two separate occasions last year she went after West and berated him for what she perceived as his character flaws.

Last August, she posted a video addressing Kanye’s viral abortion rant during his first campaign rally in South Carolina, claiming he didn’t actually have bipolar disorder, in addition to labeling him a, “closeted homosexual.”

Then, in December, she proclaimed, “Kanye, this is all your fault,” after seemingly taking offense to an advertisement for SKIMS shapewear line featuring Kim Kardashian West.

“It is really time for Kim Kardashian to retire this beat up coochie. It just looks worn the fuck out. Nothing about this big beaver she has in this photo is even remotely sexy. Terrible advertising,” Banks wrote on screenshot of the add posted to her IG story.

Along with Azealia Banks’ thirsty mention of Kanye West, Jay Electronica also sent a shout out to Ye recently, affirming his admiration for the Chicago multi-hyphenate’s poise while navigating his ongoing divorce with Kim Kardashian West.

“@kanyewest from afar, seems like Almighty God is putting His final touches on His Mighty Sword (you),” Jay Electronica wrote. “I would imagine the pain is intense. After this though, you unstoppable. Flame on King! and as for the rest of em, my mom would just say  ‘well Son, fuckem’.”

. @kanyewest from afar, seems like Almighty God is putting His final touches on His Mighty Sword (you). I would imagine the pain is intense. After this though, you unstoppable. Flame on King! and as for the rest of em, my mom would just say “well Son, fuckem.

For unrelated reasons, Jay Electronica also shared his excitement for Kanye’s next moves, but somehow his words seem to eerily align with Azealia Bank’s sentiments that their child would be a gift to the world of sorts.

“I literally CANT WAIT so see your next Beautiful moves and offerings,” he wrote. “Thank you for all of the Beautiful ones you’ve given us thus far.”

. @kanyewest I literally CANT WAIT so see your next Beautiful moves and offerings. Thank you for all of the Beautiful ones you’ve given us thus far.