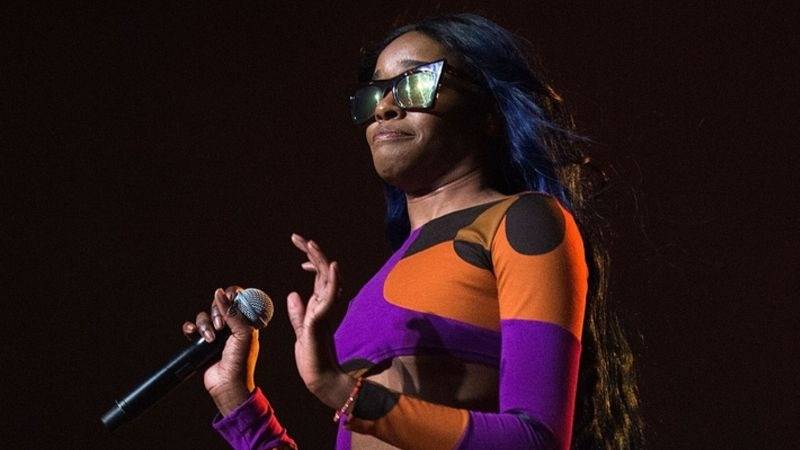 The Hip Hop community is well aware of Azealia Banks’ antics by now. The “212” rapper never shies away from speaking her mind no matter how controversial her takes may be. Case in point, on Wednesday (December 9), Banks set her sights on one of the most famous couples in Hollywood — Kim Kardashian and Kanye West.

Banks was apparently triggered by Kardashian’s recent Instagram promo for her SKIMS shapewear line, which (of course) features the reality television star modeling some of the items.

The Harlem native, taking notice of Kardashian’s pelvic area, wrote in one of her Instagram Stories, “It is really time for kim kardashian to retire this beat up coochie. It just looks worn the fuck out. Nothing about this big beaver she has in this photo is even remotely sexy. Terrible advertising.”

She then blamed Kanye for her existence, adding, “Kanye, this is all your fault.”

By Banks’ standards, her comments were relatively benign compared to her previous statements about Ye. In August, Banks accused Kanye of being a closeted homosexual following his tear-filled abortion rant during his first presidential campaign rally in South Carolina.

“Maybe the fact that a lot of those mothers did not want to abort their child, you know?” she said at the time. “Maybe due to fucking systematic races and you know, you can’t make an equality. Maybe they had to give their babies up. Maybe there were a lot of tears that the women had to cry, you know. You ever stop to think about that, muthafucka? No, because you don’t have a fucking bipolar disorder nigga. You’re a closeted homosexual.”

But then Banks seemed to stand up for Kardashian in September, telling Ye to apologize for allegedly calling Kardashian a whore.

While Banks is busy delivering scathing commentary on a host of different celebrities, she hasn’t dropped a proper studio album since 2014’s Broke With Expensive Taste. In 2019, she released a mixtape called Yung Rapunxel: Pt. II and followed up with two singles — “Salchichón” featuring ONYX and “1-800-Nu-Checks” — earlier this year.

Other than that, Banks has been unleashing on the ‘Gram and at one point, even shaved her head on camera. Check it out below.