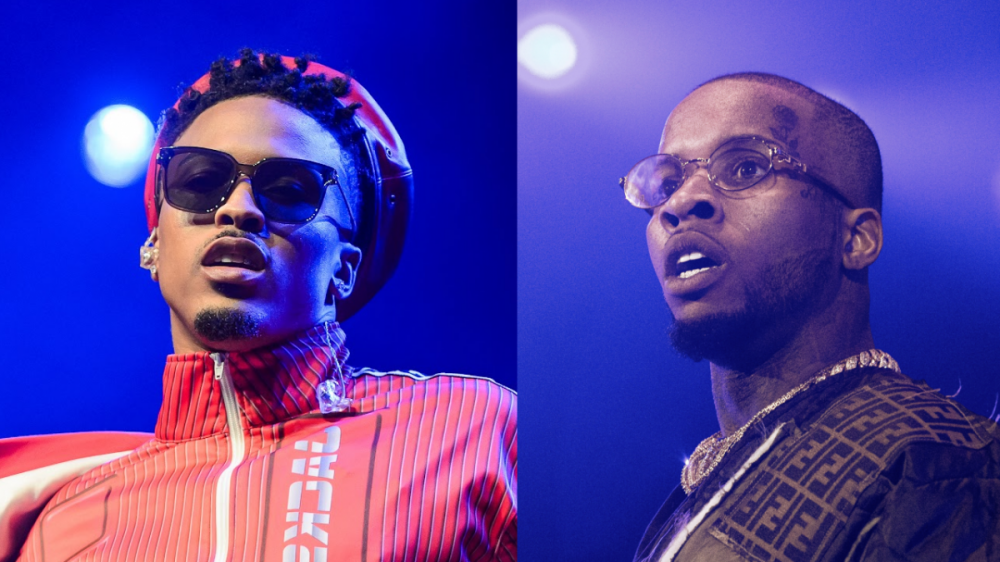 August Alsina has accused Tory Lanez of assaulting him and leaving him with a bloodied mouth.

The Testimony singer posted a photo on Instagram on Sunday (September 18) showing him leaning against an elevator wall with blood running down his mouth — the aftermath, he says, of Lanez sucker punching him.

As Alsina claimed in his caption, the Chixtape rapper and his security team confronted him after his show on Saturday night (September 17) over him refusing to shake Tory’s hand.

Alsina explained he assumed Tory didn’t like him given his past comments about his relationship with Jada Pinkett Smith, while also mentioning his doctor had advised him to limit contact with others in the wake of his recent health issues.

“As I’m exiting the building after the show last night, A 4’11 sized leprechaun ran down on me w/ 8 oversized security nigxas, whom I greeted each individually upon their walk up as they tried to press me,” he wrote. “Whole time, I’m one deep. No security.

“Tory continues to ask w/ a broken ego why I didn’t dap him up, I go on to tell him.. I was a fan of him and didn’t understand him speaking on my business publicly In the past, because I don’t know him or ever met him until last night. So when he spoke it caught me off guard because of his past actions, i assumed he didn’t like me, that’s all.”

He added: “Not to mention, with my history of health & condition just recently overcoming being paralyzed, my doctor directed me not to compromise my health while out on road and shake as less hands as possible due to corona, & monkeypox.”

According to August Alsina, Tory Lanez allegedly took a hit from “a blunt laced with cocaine” and punched him in the face when he had his head turned. He then hid behind one of his security guards and ran back into the venue.

“Never any disrespectful words were exchanged, so i was a bit confused at how somehow he turnt him self up w/ anger after hitting a blunt laced with cocaine obviously, (i heard the fizzle) and he snuck me when I turned my head to move to the side amongst all his antsy moving and to keep an eye on the endless n-ggas that was w/ him surrounding me,” he claimed.

“Which was security and some nigxa with a gun tucked… whom he then proceeded to run behind and hide to run back in the building. There was never a ‘fight’! Simply an Assault. Dude has no real friends, and is on a crash out mission.”

The New Orleans native also claimed Tory’s team captured the whole incident on camera and demanded they release the footage, which he says will debunk the “falsities” the rapper has allegedly been feeding to blogs.

“With that said, I was gone keep it G & not come to the net, but you moving with foul intent feeding falsities to blogs to look for a ‘moment’ cus them moments ain’t happening on stage for u,” he wrote. “I will assist you in that, gracefully.

“His ppl got the whole thing on camera, PUT. THE. FOOTAGE. OUT!! I’d like to see it 🙂 anyway, leme go clean this blood off my face w/ some @encinawellness.”

August Alsina later returned to Instagram to share more photos of the bloodied aftermath of the alleged assault, showing close-ups of a gash on his lip, cuts and grazes on his elbow and knee, and blood pouring from his mouth.

“Me after a toupee’d sneak attack then being man handled by buku security one deep, as the jealous leprechaun run’s back off into the building,” he captioned the images. “[crying face emoji] @encinawellness is the key to healing this. I b back with my results once I heal up.”

Tory Lanez seemingly denied the allegations in an Instagram Story posted on Sunday, claiming he has been locked in the studio and focused on self-improvement.

“I don’t know what everybody talking about …. But I’ve been in the studio,” he wrote. “I’m not in anything negative … Ive been working on my self …. And being a better person [smiling face with halo emojis].”

The altercation was first reported by Gossip of the City, who claimed that Tory Lanez “KO’d” August Alsina after the R&B crooner “got froggy” with the rapper over his past remarks and “wanted to take it to a negative place.”

The comments in question stem from an unreleased Tory Lanez song that was previewed on social media in July 2020, on which he rapped: “Let me start fucking on Jada, I ain’t gon’ snitch like August.”

Earlier that month, Jada Pinkett revealed on her Red Table Talk show that she’d had an “entanglement” with Alsina while separated from her husband, Will Smith.