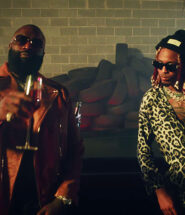 We all know the backstory of the term “entanglement” – Alsina’s secret relationship with Jada Pint Smith. Riding the term’s wave, Alsina taps the Boss for the R&B croon-heavy single where Alsina reflects on past relationships. The explosive video features a cameo from the lone guest feature, and Alsina’s leading lady.

“I don’t know why that word is such an issue. I would agree with Jada. If you look up the definition of entanglement, it is a complex and difficult relationship. It was exactly that. I think it’s just the language that probably stuck out to people. But I definitely have to agree with it being an entanglement. It definitely was something complicated, a complicated dynamic.”