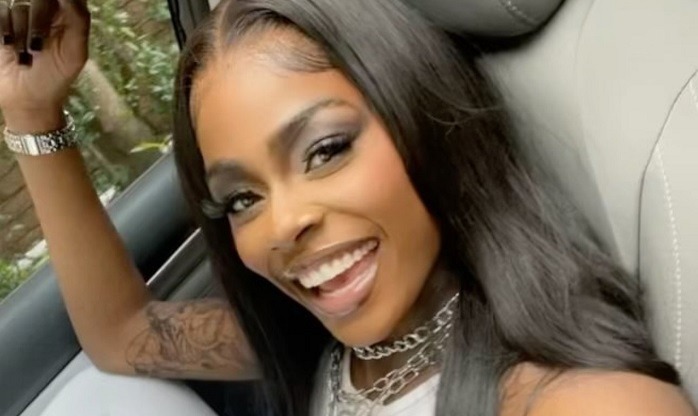 What’s the saying? “Tatt my name so I know its real.” Atlanta native, Omeretta puts a new definition to ride or die after the 25-year-old rapper showed off her six tattoos on her Instagram story. Fans were quick to express how they felt about the rapper getting her boyfriend’s name tattooed on her six times in various places on her body. Not only were fans shocked that the rapper had her boo’s name tatted loose, but they were also shocked to find out that Omeretta’s prison bae is serving a lengthy 20 years behind bars.

“I don’t understand why Omeretta had to get her n*gga name tatted like 5 times? H*e he locked up not dead,” one fan wrote on Twitter.

“Tabyron is doing 27 years for armed robbery. Omeretta is too beautiful to settle for this type of life,” another fan commented.

After receiving so much negativity following her posts, Omeretta jumped on Twitter to address the hate.

“Chileeee I got these folks big mad,” she tweeted before directly addressing a few claims. One fan tweeted, “Someone has to tell the truth, she will 100% regret this… STATISTICALLY when you get a tat of someone the person feels they can mess up and still own you, she got 6. SHES DUMB OFF D*CK.”

Omeretta quoted the tweet and explained that her boyfriend also has her name tattoos multiple times. “He got my name 6 times too 2 in his face 1 in his head what we talking bout again?? And my face on his hand, like what’s the convo?? I’m confused you thought u ate that,” she replied.

Omeretta then retweeted a few supporting fans who defended the rapper’s actions, telling others to mind their businesses. Along with fans, Asian Doll stepped in to defend Omeretta amongst the hate as she too has 6 tattoos of the late rapper, King Von.

“You good gang. I got mines tattooed six times, too @omeretta4L. Some people just express their love for others differently. That’s all.”