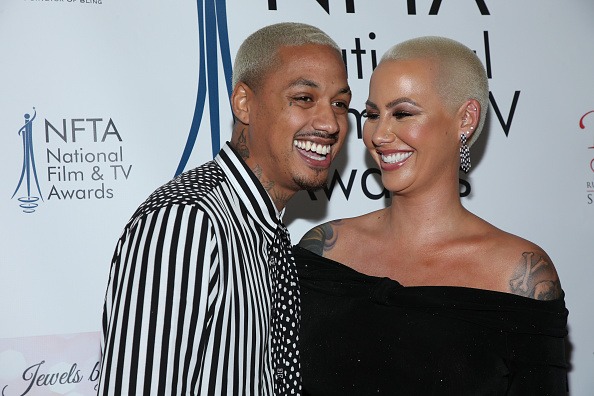 Amber Rose took to Instagram Story to give an update on her relationship with Alexander “AE” Edwards and her revelation may shock you.

“I’m tired of getting cheated on and being embarrassed behind the scenes,” Amber wrote. “All 12 of y’all bums (the ones that I know of there’s probably more) can have him.”

She continued, “Y’all very much knew he was in a relationship with a baby and y’all decided to f–k him anyway. I saw all the texts and DM’s. Y’all were well aware but y’all don’t owe me any loyalty so it’s whatever.”

The model didn’t publicly name her baby’s daddy or the women he had sexual relations with “because I’m not in the business of ruining lives but y’all know who y’all are.”

“I can’t be the only one fighting for my family anymore,” she added. “I’ve been so loyal and transparent but I haven’t gotten the same energy in return…The lack of loyalty and the disrespect is ridiculous and I’m done.”

The music executive confirmed her allegations on DJ Big Von’s Instagram live. When asked about his thoughts on Amber’s post he responded, “‘S—, I got caught.’ I got caught before, you know what I’m saying? And she’s just had enough, obviously.”

He added, “I love her, though. That’s, like, my best friend, the mother of my son. I love [Sebastian], my stepson too. But…I like women.”

“At the end, I don’t think anybody can be happy or successful if you’re not truly yourself, whether other people understand it or blame you…” he continued. “It’s just who I am, and it’s not how she wants to be loved.”

AE added that Amber “tried to put up with it and look the other way” but it was ultimately too much for her. “I know that I could stop [cheating],” he said. “I could give her a good, solid six months and just really like, deprive myself of my true nature for as long as I can take it but I don’t want to live like that.”

Amber blasted her mother in a separate post. “My raging narcissistic mom can get the f–k out of my life too. On my kids.”

She said, “I’m tired of being mentally and emotionally abused by people that I love.”

“I’ve been suffering in silence for a long time and I can’t take it anymore,” Rose continued. “That’s why I’ve been so quiet. I’ve been a shell of who I used to be but I refuse to let anyone damage me anymore. Family or not.”