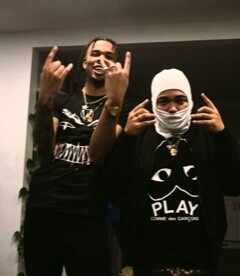 Flipping to his counterpart, Dasean ‘AllStarr’ Savery likes to mix Syracuse with his experiences  of being in the Bronx for a significant part of his childhood. Growing up in a musically inspired  family as well, he began writing music at the age of 12 without producing a single until the age  of 21. After developing those years of songs into bangers, AllStarr had the opportunity to open

for the XXL Freshman Class performance in Jacksonville, Florida. Bringing his northern  inspiration to Florida, his catchiness has led him to top industry professionals wishing to help  propel his career. He prides himself on his ability to perform any stage always giving the  audience a show worth paying for. Referring to the XXL show, “I went on stage and gave it my  all and by me doing that I had a successful show from fans wanting pictures and autographs to  famous artist acknowledging who I was”.

Both Syracuse artists are sitting on years of unreleased music waiting for the right time to take  over their avenue in the industry. Already with hits out, validate the continuation of their  careers as they keep releasing all their sacred hits. With their latest collaboration climbing the  charts, make sure you show your support to AllStarr and Lucciano with tuning in on all  streaming platforms!