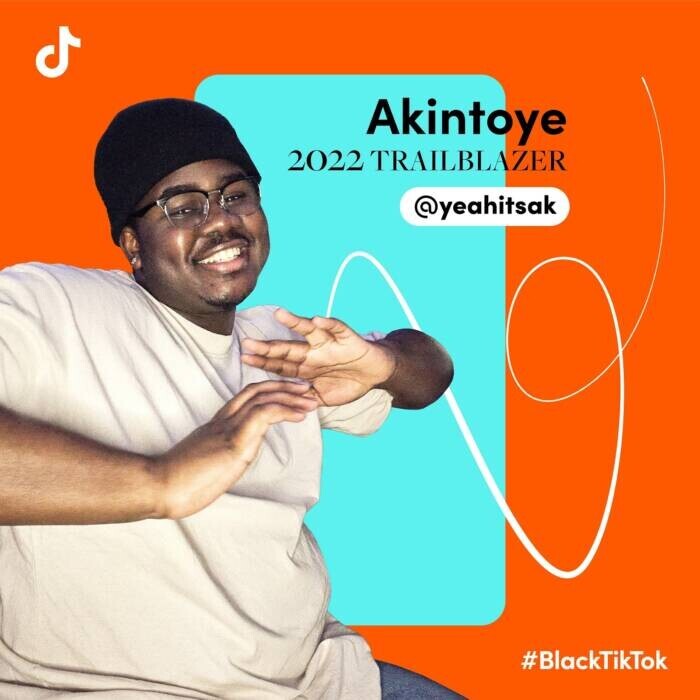 In celebration of Black History Month and the contributions of Black creators, TikTok is amplifying the voices of Black creators on the platform with the second annual Black TikTok Trailblazers List. Among the list is the Toronto creator, Akintoye ( @yeahitsak ), a rapper who shares his unique lyricism with comedic flair.

Akintoye built a strong following with his open verses over reality show theme songs, duet challenges, and remix makeovers to popular memes – cue the “Holy Spirit Activate” freestyle! Most notably, his “I’m Broke” freestyle boasts over 28.7M+ views and 20.4K+ video creations using the sound. His freestyle soundtracks creators’ as they reject their friends’ invites to go to the club, reflect on their spending habits in their first month of college, and share home cooking videos. His growing popularity on the platform inspired him to share his own original music with his 2.3M followers. Akintoye’s career continues to flourish off the platform, garnering over 126k monthly listeners on Spotify to date.

In this exclusive interview with HipHopSince1987, the rising star talks to Digital Crates about his life behind the scenes. He talks about creating out of necessity during the pandemic to fill the void left by the lack of performance opportunities. He stumbled on to TikTok and his VERY first posts went viral amassing millions of views. He is a rare artist in viral culture who utilizes true school elements of hip hop with sharp lyricism, clever wordplay, and a solid formula of bars in his writing and recordings.

He is an old soul who is true to the game and has influences that range from Big L, Mos Def, and Eminem, to R and B stars like Aaliyah, Anita Baker, and of course Michael Jackson. He is a student of the game and uses platforms like Spotify and Youtube to deep dive into music research to find inspiration. Music is like therapy for him and he writes lyrics every day. Posting on Tik Tok became part of his daily artistic routine and the results have been validating his skills, dedication, and work ethic.

As an artist, he has been rounding out his sound with Rock And Roll and mainstream influences making him prime to cross over from rapper to full-on hip-hop artist. As a social media-based creative he has a routine that starts with making sure the music is sounding good and then filming his visuals around the track. He tries to pump out at least one solid video every day and throughout this process, his fanbase has expanded to all social media platforms. His content is high quality and he is focused on building longevity into his career. His biggest goal is to make classic music and albums that will stand the test of time. Outside of music he has plans to expand into writing, acting, and directing as well as getting involved in community work and platform building.