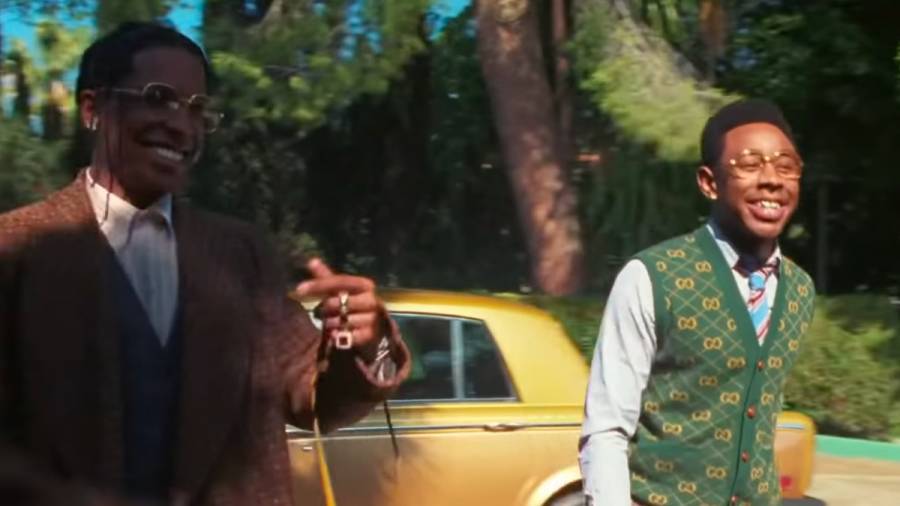 A$AP Rocky and Tyler, the Creator are the stars of the newest Gucci Tailoring campaign that’s as quirky and colorful as they are.

The ad spot premiered on Tuesday (September 29), featuring both rappers attending a dinner party at iconic musician Iggy Pop’s California home. The trio dance and goof around for the 90-second clip directed by Harmony Korine, which was filmed just before the world went into lockdown.

In a statement, Gucci’s creative director Alessandro Michele spoke on the seemingly odd pairing of the Godfather of Punk with Rocky and Tyler.

“A certain type of fun is also portrayed and the idea of how one’s obsession with appearances can create a kind of common ground that can become a sort of brotherhood,” Michele said. “It was beautiful to see these three men together, seemingly different but very similar.”

While his affinity for high fashion has been well documented over the years, Rocky actually credits a song from Dre of the multi-platinum production duo Cool & Dre as his entry-point. In a recent interview with HipHopDX, Dre recalled a moment in 2015 where Rocky told him about the influence his record “Naomi” had on him.

“Me and Cool, we was just chilling in the lounge,” Dre said. “He walked in, he saw us and we saw him, but we really didn’t say anything to him. He didn’t say anything to us either. He went into his room and probably 45 seconds later, he comes back out and goes, ‘Yo, I know who y’all are. I’m going to tell you some crazy shit, man. Oh, that walking like a chick ‘Naomi’ record, that shit changed me, bro. I didn’t know nothing. Yo, I really started digging fashion when I heard that song, D, I just want you to know that shit had a huge effect on me.’”

And the rest was history. Watch Rocky and Tyler’s Gucci Tailoring ad spot up top.