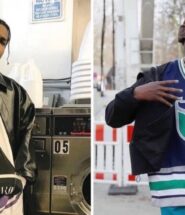 A$AP Rocky knows a thing or two about fashion, so it would make sense that someone would want to pick apart his brain for some consulting.

During a special on-camera interview with GQ Magazine, A$AP Rocky critiqued several of his outfits over the years. When he got to a Pyrex Vision ensemble from the early 2010s at the 1:02 mark, the Harlem-bred rapper revealed he played a part in Virgil Abloh changing the name of his luxury fashion line.

“Virgil had to change Pyrex cause of a cease and desist,” Rocky recalled. “I think the beaker company Pyrex was coming for that ass, so he had to do the wise thing. He consulted with us and was asking some opinions — subsequently, everybody is walking around in Off-White.”

Abloh created Pyrex Vision in 2012 and laid the groundwork for streetwear to be seen in the high-end lens it is today. Unfortunately, Pyrex Vision lasted only one year as Abloh explained the brand was becoming too commercial instead of remaining an expression of artistic experiment.

It looks like it was more than a change of vision according to Lord Pretty Flacko. Elsewhere in the interview, Flacko claimed A$AP Mob is the reason why mid-top white Nike Air Force 1’s, Air Jordan 1’s and Air Jordan 4’s are popular amongst the youth today. Fans also found out the A$AP Mob leader wants to design a sneaker for four major athletic footwear brands.

“I think it’s a battle between Puma, Converse, Adidas, and Nike,” he said in regards to designing a sneaker. “I want to do all four, a sneaker for every brand.”

For GQ’s June/July feature issue which dropped May 19, A$AP Rocky acknowledged his alleged relationship with Rihanna saying he couldn’t be happier with how things have gone thus far.

“The love of my life,” he refers to her. “My lady. So much better when you got the One. She amounts to probably, like, a million of the other ones. I think when you know, you know. She’s the One.”