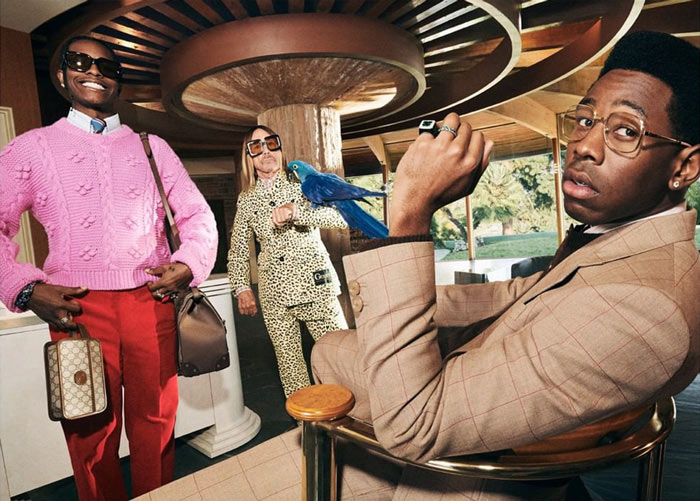 A$AP Rocky and Tyler, the Creator are new the faces of Gucci.

The rappers star alongside Iggy Pop in the luxury brand’s new tailoring campaign, photographed and directed by Harmony Korine. In the film, the two pull up to Iggy’s midcentury mansion in Los Angeles in a vintage bronze Rolls-Royce while rocking Gucci’s retro menswear. The “Godfather of Punk” greets his guests before they show off their groovy moves to Cerrone’s ’70s disco tune “Supernature.”

After dancing around the terrace and pool, the stylish trio dines on heaping bowls of spaghetti, while joined by some feathery friends including Iggy’s parrot Biggy Pop and a blue macaw. Flacko dons a monogrammed Gucci blazer and oversized sunglasses, while Tyler looks dapper in a green three-piece suit.

The campaign was shot in February, prior to the pandemic. “The result is a group campaign with three men who I believe had fun, too,” said Gucci’s creative director, Alessandro Michele. “There is always this image of eccentricity, because they are in fact eccentric themselves. A certain type of fun is also portrayed and the idea of how one’s obsession with appearances can create a kind of common ground that can become a sort of brotherhood. It was beautiful to see these three men together, seemingly different but very similar.”

Meanwhile, Tyler is encouraging his fans to go out and vote. He shared a PSA with his followers, stressing the importance of voting in the upcoming election. “This is actually gonna be my first time voting, but I see the light,” he said. “Y’all want all these rights and shit, then fu**in’ pull up.”