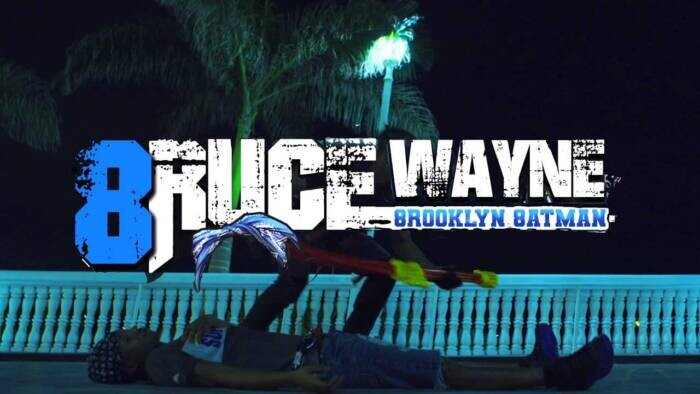 8rooklyn 8atman follows up to his first single “Chiddy Bang,” which received over 150,000 views on Youtube, with his new fun-filled music video for the song “8ruce Wayne” produced by Digital Crates. “8ruce Wayne” depicts 8rooklyn 8atman taking on Harley Queens as they initiate an unprovoked attack against Brooklyn’s dark knight. The video was directed by 8rooklyn 8atman. @Controversenyc shot and edited the video that was filmed on location in the Don Cesar Hotel in St. Petersburg, Florida. The Don Cesar Hotel was formerly a Veterans Affairs hospital and made the perfect backdrop for Harley Queens to run wild in the makeshift Arkham Asylum.

“I want people to be entertained,” said 8rooklyn 8atman. He continues “I’m not a typical artist and people may feel my get-up is a gimmick but it isn’t. After being released from prison I wanted to be someone that my sons can look up to. That’s why I started going by Brooklyn Batman. It allowed me to engage with my 4-year old son when I came home in a fun and positive way. I hope fans take away from this that I am Brooklyn Batman and my job is to motivate people through music and share how I overcame my own many struggles. Growing up in foster care, not being wanted, getting wrapped up in the system were all obstacles to me. However, a seed was planted and it grew out of concrete for me. It’s time I plant some seeds to the fans and other people who might just need to hear something good. As I say in my verse on Bruce Wayne, ‘if you are what you think then think you’re the shit!’”

The Ultraviolet Pirates Tour headlines recording artist Riff Raff of Houston, Texas and Grammy-winning DJ, “The Mixtape King,” Queens-born DJ Whoo Kid. JodyHighRoller Entertainment announced Brooklyn Batman’s addition to the tour from August 14 to August 29, 2021, following an impressive showing during the United States southeast region leg of the tour. Brooklyn Batman’s performances are known to be theatrical and have featured Harley Quinns and real-to-life body-slam of The Joker.

8rooklyn 8atman is a recording artist, entrepreneur, and book author. Following the release of his book “Seeds in the Concrete,” it sold over 5,000 copies. Brooklyn Batman also sells the books on tour as part of his merch. The Brooklyn-rapper performs with his band the Frontline Avengers. The Frontline Avengers include Qu3st Qu3st, Reck Savage, and RockstarODD and they act as an anchor to Brooklyn Batman’s high-energy performances. Imurje Inc is the label. Brooklyn Batman is managed by One Brikk Worldwide.